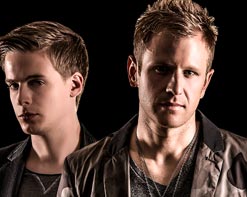 If you ask any loyal fan of Austin, TX EDM duo Tritonal, and they’ll quickly tell you that this is an experience that has to be seen live to fully appreciate. Upon the release of their debut album Piercing the Quiet, in 2012, the production and DJ duo of Chad Cisneros and Dave Reed have rapidly evolved from up-and-comers to one of the most electrifying acts on the scene.

Their undeniable presence on the festival circuit at stops like Electric Daisy Carnival, Escape From Wonderland, Ultra Music Festival, A State of Trance 500, and Creamfields, are all events that galvanized their place amongst their loyal fan base, affectionately known as Tritonians.

But as spectacular as their live show has become, it all begins with the music. Piercing the Quiet charted eight Top 20 singles on Beatport, including multiple #1 listings. Not to mention, Now Or Never – their biggest seller to date – earned a spot in the top 5 on Billboard Dance Airplay. In 2013 they embarked on the ambitious undertaking of releasing the Metamorphic trilogy of EPs. The title was specifically chosen by the group because “we were well aware that as artists, producers and DJ’s we were going through a change in our journey, both as people and with our fans. It was a time of rebrand, and like the Triangle that represents the ‘Tri’ in ‘Tritonal’ we wanted it to have 3 parts to the story.” Upon releasing the 3rd installment in September of this year, Metamorphic III, the evolution has fully realized and though it took longer than anticipated the results were immediately apparent. Songs like “Deep Into Black” and “Bullet That Saved Me” are highlights of the album, with “Anchor” being perhaps the most memorable.

The “Anchor” video runs in lockstep with the propulsive energy of the song. It starts with a man washed up on a deserted beach. It’s quite the mess and we don’t know how he got there but when he wakes up he finds a message in a glass bottle and he immediately knows what he needs to do. He needs to find his anchor. With flashbacks of a happier time as his motivation he climbs the steepest hills, navigates treacherous terrain, and eventually finds himself in the passenger seat of a compassionate driver, never losing his determination to find his way back to the one he loves. It’s an inspiring clip with beautiful scenery and vivid colors abound and one you won’t want to miss.

Few producers on the global music scene are generating as much excitement as Tritonal and we are very excited to be working with them to continue that climb. For more information on Tritonal please contact Andy Gesner and the HIP Video Promo staff at (732)-613-1779 or email us at info@HIPVideoPromo.com . You can also visit http://www.TritonalMusic.com/ for more info on Tritonal.