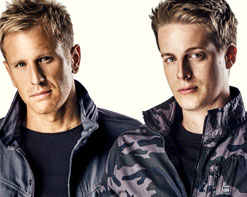 2015 was breakout year for Austin’s Tritonal. The band delivered two wildly popular collaborations (“Until You Were Gone” with The Chainsmokers and “Untouchable” with Cash Cash) and also embarked on a massive 40 city tour where they absolutely killed it every single night. One of the highlights of every show was the propulsive new single “Blackout,” highlighted by the mysterious voice of Steph Jones. Fans and critics were clamoring to know when the single would finally be released and now they’ve gotten their wish. We’re all beyond stoked to bring you the gorgeous and inspiring new video for “Blackout!”

Sure to elevate them to even higher levels in 2016, the brand new single did not disappoint fans or critics alike. DJ Times described it as “the duo crafting their signature ethereal melodies over futuristic trap-inspired drops.” In the first three days since release the song has already climbed to #15 on the iTunes Chart US, #3 on the iTunes Chart CA, and 500k Spotify Streams. Not to mention, the video itself is set to eclipse 100,000 views in the first week of release.

Once you see the video it’s easy to understand why viewers are quick to eat it up, as it is much more than a one trick pony. “Blackout” is a clip of sweeping beauty. Taking place in the darkened city streets of an undefined city, the video uses a clever combination of warm and cool tones to paint a picture of two souls coming together. From across the cityscape a man watches a girl in her apartment as she endures an emotionally abusive home life. She runs away and he follows her, discovering she has a unique secret. And while this secret might make her feel ostracized in life, in reality he shares it too, and he is eager to make the connection with her. When their connection is revealed and the moment happens, it is an invigorating sense of rejuvenation between two beautiful individuals as they realize they will never be alone again.

All of us here at HIP Video Promo are so excited to be a part of the Tritonal team, and know that Enhanced Recordings will always deliver the best of the best. They’ve once again managed to top themselves with “Blackout!” Please get in touch with all of us here at HIP Video Promo to let us know what we can do to help get this video into your programming. Contact us at (732)-613-1779, email us at info@HIPVideoPromo.com . You can also visit http://www.TritonalMusic.com/ or http://www.EnhancedMusic.com/ for more info.