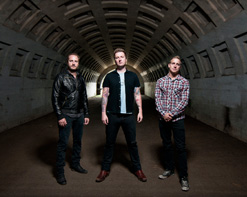 Greetings programming comrades, it is Andy Gesner and the HIP Video Promo staff here to present another standout music video from an up and coming indie-rock band called The Trophy Fire. This California based trio highlights a magnitude of current modern rock bands. With comparisons to the likes of Breaking Benjamin, 30 Seconds to Mars, and Dredg, the whispery vocals and genuine guitar chords strike at a number of different chords.

It is no surprise that brothers Adam and John Schuman have been playing together since grade school. The brothers grew up on the influence of musical artists such as Depeche Mode, Radiohead, and Sunny Day Real Estate, which echoes throughout each melody. Their music is different and engaging, and the lyrics strike at several different meanings. Spanning from metaphors to personification, the empowerment of these lyrics force you to envision the lives and struggles of everyday people. Their heartfelt approach has already resonated throughout the blogosphere – The Aquarian Weeklymagazine raves that despite “all the competition in the alternative music genre, this band stands on their own.” The group has also landed features in Noisepop, San Francisco’s SFGate and a shining featured artist review on SaveAlternative.com. The band has developed a strong national fan following through extended touring with established acts like The Dear Hunter, Fair To Midland, Balance and Composure, Bird By Bird (ex- The Matches), and Dredg (on which singer/guitarist Ben Flanagan served double duty, playing backing guitar with the popular alt rockers). The Trophy Fire has also performed at the 2011 Noise Pop Festival, opening for Wavves, Ya La Tengo, and Best Coast.

In their video for “Tired Eyes” from their album Modern Hearts, viewers are entertained by a heart-felt story line. The main character of the video represents one every day person (just like you and me), and it is obvious that he is missing a good number of people whom he loves. The video bounces between this bewildered soul and the band performing their song “Tired Eyes.” What will captivate you most is the chorus of the song, where it is clear that the main point is to make us realize that we hide ourselves behind a mask every day. What we see, what we feel, and what we believe is all perceived from behind our masks, and the lyrics of this song personify these definitions in a dark and luring manner. The lyrics and power of this video will pull at the strings of your heart in such tender ways, but it will still rock your face off. The subtlety of the vocals enhances the meaning of the song, and it will guide you to a place of mysterious unknown.

The Trophy Fire’s music is endearing and mesmerizing, and here at HIP Video, we are proud to be working with such a humane group of individuals. We would love to hook you up with copies of the new album, Modern Hearts, so please don’t hesitate to be in touch if you would like some copies. If you need more info, call Andy Gesner at 732-613-1779 or e-mail us at info@HIPVideoPromo.com. You can also visit www.GreydayRecords.com or www.Facebook.com/TheTrophyFire to find out more about The Trophy Fire and any upcoming tour dates near you.