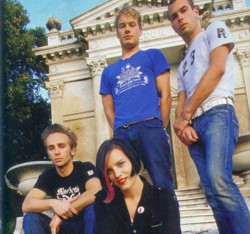 A big hello to all of my music programming pals! It’s Andy Gesner and the staff from HIP Video Promo, here to share another cool independent video with you. Since the late nineties, Northern California music aficionados have known where to turn for boisterous, loud, splashy pop-punk – Tsunami Bomb. These rock and roll veterans have been tearing up American punk stages for a few years now, and after spending most of 2004 and early 2005 on the road (including a wildly successful string of shows in support of Rise Against), they’re set to take the act to Europe next month on the Atticus tour. They’ve built their reputation on their ferocious live set and their surprisingly nuanced recordings. The Ultimate Escape, released in 2002, was a Critics’ Choice in many Bay Area publications that don’t ordinarily favor punk rock: writers admired its brassiness, its verve, and the larger-than-life persona of cryptically-named frontwoman Agent M that it projected.

With The Definitive Act, Tsunami Bomb preserves the raucous energy and the pop-punk hooks, but adds an undercurrent of hard-bitten disillusionment. This time out, M sounds less like a cartoon superhero and more like a woman with some legitimate complaints to air. Much of the record examines the sticky region between art and commerce, and Tsunami Bomb is not afraid to point fingers at those whose only interest in indie rock is making a quick buck. On the thoughtful “Negative One To Ten”, she takes punk rock back to the basics: a group of kids on a city street, experiencing music as something vital, personal, and redemptive, hidden away from the crushing gears of the culture industry.

“Dawn On A Funeral Day”, the bitter lead single, is also the opening track and first warning shot on The Definitive Act. Staggering under the weight of expectations and under the surveillance of vampiric businesspeople, an outraged M is on the verge of breakdown.”Imagination in a chokehold,” she sings “I’ve been steamrolled by gold records.” Behind her, the six-strings pump and slash and the drums pound. It’s all a perfect counterpoint to M’s passionate, rigorously melodic approach.

Nate Weaver’s crisply-shot video for “Dawn On A Funeral Day” literalizes the song’s exhaustion and fatalism. Pursued by a hearse, M runs on the hard tarmac of a city street, clutching her notebooks of poetry to her heart. From time to time, she drops pages – but she can barely stop to pick them up. The wheels of the hearse grind her writing into the pavement. Finally, backed by her band, she turns and gives her tormentor the finger. It’s a moment of defiance, but it’s fleeting: in the closing shot, we see that the hearse has rammed straight through the drum kit, and the group is nowhere in sight. This entire sequence is shot in slow motion, and it unfolds like that familiar dream sequence where every movement is painfully labored, and no matter how hard you try to flee, your paces will not take you fast or far enough.

We’ve had a very enjoyable and successful experience in the past working with Nate Weaver, Sharry Billings, and the whole Kung Fu Records crew, and are looking forward to more of the same. Tsunami Bomb will be touring in Europe in the immediate future, but they will be returning stateside in June and will be on Warped Tour this summer. If you would like a video ID or video interview set up, let us know and we’ll make it happen. If you need more info call Andy Gesner at 732-613-1779, or email info@HIPVideoPromo.com. You can also visit www.KungFuRecords.com , or  www.TsunamiBomb.comto find out more about this incredible band completely worthy of your attention.