Twilight Singers “On The Corner” 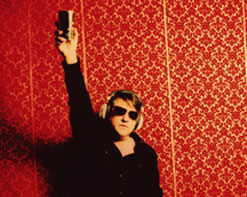 Greetings ladies and gentlemen of the programming world! It’s Andy Gesner here with the HIP crew to you a video from an artist with a rich musical history and a cult following that spans over a decade! Twilight Singers is the initially formed side project of the popular 80s and 90s era punk/R&B act The Afghan Whigs by leader Greg Dulli in 1997. Dulli has since then put out five studio albums backed by international tours, including an album recorded partly by generator power in the aftermath of Hurricane Katrina. Dulli has achieved indie legacy and cult credibility with his Sub Pop records releases from The Afghan Whigs and Twilight Singers. He now returns with another installment filled to the brim with potent psychodrama and alt-rock goodness that is “On The Corner.”

Twilight Singers unleash their alt-rock ego with no chains to hold it back in their bold and kinetic track, “On The Corner.” “Spread your legs/Insert your alibi” Dulli sings here, a line that captures his timeless essence: a turn of phrase both clever and vulgar, its truth hitting home all too painfully. Twilight Singers enlists the help Queens of the Stone Age/Eagles of Death Metal drummer Gene Trautmann to drive the point home with all his thundering boom. The guitars are dark and brooding, which act as an almost nostalgic reflection of 90s industrial gothic rock. Most importantly, the vocals soar above the instrumental arrangement like an alien mothership towering over an innocent city.

All of the effort has not gone unnoticed, as critics across the board rush to embrace the new Twilight Singers record,Dynamite Steps. Rolling Stone magazine says that the album is one that “no one can resist,” scoring it highly. SPINmagazine has also called the record Dulli’s “strongest, most widescreen set since the Whigs’ mid-’90s heyday” and gave it a top ranking score as well. Pitchfork, the popular and hard-to-please blog, has also claimed that Dynamite Steps is “Dulli’s best collection since Blackberry Belle, [an early Twilight Singers record] and part of what gives the album its impact is how precisely and dynamically the album has been sequenced.” The album has also been well received by many other blog websites, including the much read Stereogum. Twilight Singers have also received mainstream television buzz with their visit to Jimmy Kimmel Live and the upcoming performance of “On The Corner” on The Late Show with David Letterman on April 26th. Twilight singers are currently wrapping up their extensive world tour this April and heading out for a full United States run in May and lasting in June. If you would like to capitalize on the group’s visit to your city, reach out to us right away.

The video clip for “On The Corner” is as dark and brooding as the song suggests. The dirty cuts feature a crazed man running around in a Santa suit with a raw hunk of meat. The man is clearly on the edge of sanity, if not fully overboard. This disturbing element provides a rather unsettling image to follow along with the music, as the man waddles about town and even runs right into the ocean.

Join us in exposing this unique and original Sub Pop Records clip. We’ve got lots of Twilight Singers stuff here at the office and would love to share it with you and your viewers, so let us know and we’ll get it to you right away. You can also visit www.SubPop.com or www.TheTwilightSingers.com to find out more about Twilight Singers.