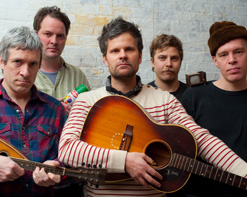 Greetings fellow programming brothers and sisters! It’s Andy Gesner and the HIP Video Promo crew, here with a clip that will send you roaming through the forest and reconnect you with the infinite and innocent beauty of preadolescent youth. We offer you to indulge yourself in the anticipated new clip from Two Dark Birds titled “Song For Clementine,” an adventurous frolic through the wilderness of soulful rock.

Two Dark Birds have come a long way since their start in Pakatakan Mountain, NY (though singer and Milwaukee native Steve Koester first made a name for himself with the band Punchdrunk and since then, he’s led Koester and also Maplewood). Their 2008 self-titled debut was not only celebrated within the indie music scene, but critically welcomed and praised across the board. The Big Takeovercalled it “one of this year’s most subdued and moving releases,” and it should come as no surprise that the influential publication jumped at the chance to premiere the “Song For Clementine” music video this month. The band was loudly lauded by Men’s Vogue, who claimed that the band created “a masterful soundtrack to self-reflection.” The record also featured contributions from members of The Wrens, Guster, Maplewood, and The Hold Steady and his been spotlighted in Nylon Magazine, Reveille Magazine, OnMilwaukeeand many more. Two Dark Birds recently recorded a song for an Esopus Magazine compilation based on the Guy Maddin film The Saddest Music in the World.

“Song For Clementine” is the first bit of goodness to come from Two Dark Birds’ upcoming album Songs For The New, hitting the physical and digital marketplace October 4th. The album is being released by indie veterans Riot Bear Recording Company (originally Made In Mexico, who are responsible for putting out records by Pedro The Lion, and members of the Gossip, Blood Brothers, Shoplifting, Chromatics and Fleet Foxes). The track is soulful and upbeat tune that features an array of brass, wind, and accordion in addition to the familiar drums, bass, guitar combo, best described as with traces of Neil Young’s On the Beach and The Band’s Music from Big Pink with echoes of Dylan, Bill Withers, and the Meat Puppets. “Song For Clementine” is about the beauty of the young, and is fantastically captured by the video, which follows in the footsteps of a young girl exploring the woods in search of her friends. The story is spliced in with performance shots of the band on location, as they weave between the trees, adding a dash of serenity to the uplifting vibe of the song.

We are ecstatic to be among the real indie rock veterans of the music world and to bring you a video that will charmingly ease you into the spirit of fall. The band will performing at the Truck America Festival this September, with tour dates on the way. If you would like to interview the band or get your hands on a copy of Songs For The New, when it is available for contests and giveaways, please get in touch right away. For more info, call Andy Gesner at 732-613-1779 or e-mail us at info@HIPVideoPromo.com. You can also visit www.TwoDarkBirds.com to find out more about Two Dark Birds and tour dates near you.