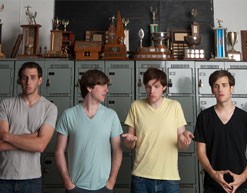 Hello programming friends, it’s Andy Gesner and the HIP Video Promo staff, bringing you a terrific new video that looks as good as it sounds! We’re always impressed when directors merge the worlds of animation with music videos. Recently, you’ve seen what The Futureheads have done with their very own comic in “I Can Do That.” However, Two Hours Traffic takes on a different treatment with their video for “Noisemaker,” courtesy of director Richie Mitchell.

In their video for “Noisemaker,” Two Hours Traffic offers up a unique way of incorporating animation into your everyday performance clip. The scene is first set with the Canadian quartet’s silhouettes performing in a completely illustrated, two-dimensional forest. Faintly in the background, an animated girl character escapes her secluded home and enters the big city, unprepared for the monsters who may engulf her. Her insecure self finds temporary sanctuary at a bar and in Two Hours Traffic’s music up until the end when the she succumbs to becoming a monster herself.

At its core, the video for “Noisemaker” has some incomparable green screen work eventually laden with brilliant colors and characters. All the while, Two Hours Traffic plays a killer performance illuminated by a vibrant moon, which later transitions to the sun rising. It’s where real life meets animation, where Two Hours Traffic becomes so much more than the background music to a story being told.

It’s undoubtedly a cool video that perfectly matches the catchy indie pop tunes of Two Hours Traffic. The band, whose name was conceived from the iconic Romeo and Juliet prologue, have intense accolades – from their music being featured in popular teen soaps like Gossip Girl, One Tree Hill and The O.C. to being one of the most raved about bands at 2008’s CMJ Music Marathon and 2009’s South By Southwest. They even won Group of the Year and Alternative Rock Recording of the Year at the 2007 P.E.I. Awards.

You can find “Noisemaker” off of Two Hours Traffic’s third album, Territory, which was produced once again by Halifax guitarist Joel Plaskett. Their latest effort has been the talk of tons of music blogs, including PopMatters.com, who reviewed: “It’s the themes of the record that allow Two Hours Traffic to show its true colors. Lyrically dense, Territory proves an admirable evolution for the band with a collective age that hovers around 100. … [Their] ability to grow accustomed to the struggles young bands face really aides Territory and gives credence to the band as artists.”

Thanks to the folks over at Bumstead Records for bringing us this incredibly stunning clip. If you need more info, call Andy Gesner at 732-613-1779 or e-mail us at info@HIPVideoPromo.com.