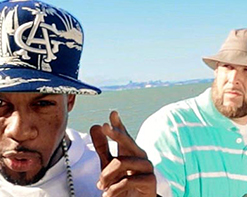 When two giants of the San Jose hip hop underground artists, rapper Tyson Amir and DJ onBEATS, crossed paths for the first time way back in ’03, they vibed right away. In mutual awe of each other’s ample and undeniable talents, they knew a collaboration was in order. It would be another ten years, however, before they joined forces to make their first album together. It was well worth the wait. Calling themselves Tyson onBEATS, their album, Purpose, matches Tyson’s mesmerizing flow and lyrical mastery with onBEATS’ soul-infused production and world-class bounce. Across 15 tracks of powerful, original hip hop, it’s clear this duo has tapped into something extraordinary and dropped a classic in the process. HIP Video Promo is very proud to present the clip for Tyson onBEATS’ latest single, “We So Fly.”

As the groove quietly fades in, Tyson welcomes his listeners to “the illest shindig in this galaxy” and enters the first verse, evoking a chill vibe replete with nag champa in the air, before the beat drops and the track takes complete control. Described by Yasin Bey (Mos Def) as “the Marvin Gaye of hip hop”, Tyson commands the mic with a presence that’s both strong and smooth. The vibe is so deep and yet effortless, leaving the listeners amazed at how they pulled off such an artistic balancing act. Thankfully, Tyson takes the opportunity to lay out the duo’s business model: “onBEATS archaeology he digging through the crate/excavate truth I spit it to the tape.” If you’re only casually listening, however, you might mistake “We So Fly” and its hypnotic hook (sung by Mikial aka M.Davis) as another example of hip hop posturing. But anyone familiar with Tyson’s conscious flow, knows he’s onto a higher plane. “Jehovah on the mind / I’m trippin’ on the meaning of existence / quoting Sufi mystics.” Careful listening will reveal lots of weighty lyrics delivered in his laid-back California style. For example: “cotton fields where the lashes used to crack our backs / that’s where my soul was born at.” But the message here is one of unity and inspiration. And with onBEATS’ production propelling Tyson’s lyrics further into the stratosphere, there’s no telling what they can do. One thing, however, is certain: “We So Fly” is powerful in both its message and execution.

The video, directed by Shihan Chowdhury, is a gorgeous, hi-def production that transitions perfectly from warm loft interiors to the lush nature of California. Shihan uses subtle effects and vivid colors as he weaves a variety of beautifully framed shots of Tyson, onBEATS, and special guest Mikail. Inside, they build on the state of the world over a plate of fresh fruits under a collage of faces of the Black Panther party members. Beneath the beautiful blue Cali sky, against the waves crashing on the Pacific shore, Shihan captures Tyson and onBEATS in their elements, paying homage to their Bay Area predecessors, Souls of Mischief. The vibe is alternately sophisticated and breathtaking, but the effect is seamless, providing the perfect visuals for a track that speaks to the heart and seeks to inspire and elevate. In short, California, dope beats and fresh rhymes, the six perfect words that sums up Tyson onBEATS.

For more information on this hella fresh hip hop duo, their album Purpose, and their great new video for “We So Fly”, contact Andy Gesner at (732) 613-1779 or e-mail the HIP Video Promo staff at info@HIPVideoPromo.com .