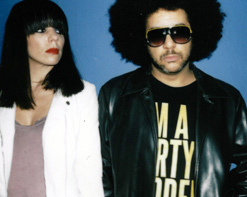 Cooper Gillespie and Greg Gordon chose to name their project Ultra Violent Rays after hearing a story about Mayan shamans creating light through vocal harmonics. They emphasize sonic experimentation in their live show and their studio recordings. They explain their references as “David Lynch, David Bowie. Most Davids.”

Gordon, a veteran of LA’s Fugazi-esque The Nervous Return (Travis Barker’s La Salle Records), and Gillespie, who was in the X-inspired trio Bang Sugar Bang (SOS Records) were previously in the indie rock outfit Mad Planet together. They formed Ultra Violent Rays to further explore their electronic leanings. Their music layers hip hop beats, dream pop melodies, dark wave synths, a healthy obsession with Science Fiction and ethereal vocals to create a sound all their own which they like to call “space pop.”

They’re currently gearing up to release their debut album, produced by Ethan Allen (Ben Harper, Black Rebel Motorcycle Club, Gram Rabbit). Until that time, they’ve been gracing audiences with standalone singles, each one pushing the sonic envelope further than that last. Today, we’re excited bring you videos for two of them, “Wish” and “Black Trees.”

The Roy Liechtenstein inspired video for “Wish” is a dazzling piece of cinema that shows both the incredible creativity and diversity of UVR. Cooper and Greg transform themselves into pop art specimens, with their bodies covered in heavy outlines, bold primary colors, and dots on filling in every nook and cranny. The duo exists in their colorful pop art world, with each word existing only as a handheld thought bubble. Yearning for a different place in the world, Cooper dreams longingly of what life might be like if they existed in the real world.

For the “Black Trees” video, they stripped away the charming innocence of pop art and embrace a darker side. A small girl is transported from her bedroom into a sinister looking forest of fright and intrigue. She hopelessly attempts to make her way through the woods, under the watchful eye of Cooper dressed in a Wiccan styled wardrobe. Her underworldly appearance is not, however, one meant to terrorize, but rather one that is meant to nurture and mentor the young girl into a new role amongst the “Black Trees.”

It’s a huge pleasure to have the opportunity to work with Ultra Violent Rays and their mindbending videos! If you’d like to learn more about this duo, please contact Andy Gesner and the HIP Video Promo staff at (732)-613-1779 or email us at info@HIPVideoPromo.com . You can also visit http://www.Facebook.com/UltraViolentRays/.