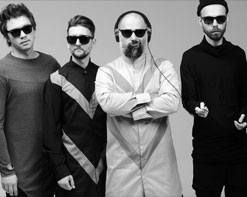 Based in Kiev, Ukraine and initially a studio project, Vagabond Specter is the joint brainchild of vocalist Pablo Specter & guitarist, keyboard player and producer Yuriy Smalius, who met in Kiev in 2014. At the time, Pablo had skeletons of songs that would later become their debut album, “MIRRORS”, until Yuriy stepped in and helped him flesh out his ideas. After a year of hard work, the duo recruited bassist Egor Gavrilenko & drummer Alex Okremov to help bring their musical vision to life in the live arena.

Since then the band have busied themselves over the last year, racking up a slew of dates throughout their native Ukraine. Including their “Secret tour” – a 25 date run through different Ukrainian towns, slots on Atlas Festival and Faine Misto Festival, and scoring support slots with Bloom Twins & Pianoboy. The band will be rounding out the year supporting legendary US altpop outfit Garbage in Kiev on November 13th.

Drawing inspiration from the likes of The Black Keys, Muse, The Killers, The National and Death Cab For Cutie among others, “Mirrors” mixes Pablo’s easy vocals atop a warm bed of fuzzy electronics, steady rhythms and effortlessly shifting guitar work. Tracks like lead singles “Half A Billion Miles” and “She’s A Bird” mix hints of Frusciante-esque guitar layering with beautiful melodies, held together by driving percussive work.

For the music video for “Half A Billion Miles,” the band teamed up with extremely talented artist and director Gosha Vinokurov to create a fascinating visual journey. The collage clip blends shots of the band filtered through a treatment in the style of cut out art with a detour into an animated territory. With so many styles and exquisite visuals at any given frame, the video is a beauty that revolves around the power of the fairer gender. Overseeing the entire process behind the console is a powerful female, pushing the right buttons and turning the necessary knobs as the vessel powers itself to somewhere between the stars.

We’re so pleased to have a band like Vagabond Specter come across our radar screen and hope that they will be wholeheartedly embraced by a North American audience! Please contact Andy Gesner and the HIP Video Promo staff at (732)-613-1779, email us at info@HIPVideoPromo.com. You can also visit www.Facebook.com/VagabondSpecter for more info on Vagabond Specter.