Val Emmich “Get On With It” 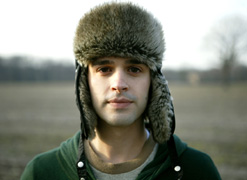 Hi fellow music lovers! It’s Andy Gesner and the staff from HIP Video Promo, here with a brand new clip from an independent artist we’re always proud to work with. Imagine waking up one day and finding yourself the subject of intense media and Internet speculation. Suddenly, there are thousands upon thousands of websearches on your name; your website and MySpace pages, already well-frequented, spike in popularity. Bloggers, message-board scribblers, and members of the mainstream media alike all want to know – who are you and what’s your story? So it went for Val Emmich on the day after he was cast as the lead character’s new love interest on Ugly Betty. But no matter how successful his acting career may be (appearances on 30 Rock and Cashmere Mafia already dot his resume), Emmich is first and foremost a singer-songwriter, and he takes his music videos seriously.

Of course, to his many fans across the country, Emmich needed no introduction. Along with these fans, we’ve followed his rapid artistic development and success with a combination of fascination and pride. We cheered when he was the first unsigned artist ever to be played onTRL (talk about indie initiative!), we wore out our copies of Slow Down Kid, his winning debut, Sunlight Searchparty, the stunning follow up, and we roared with delight at his electrifying live shows.

So when we tell you that Little Daggers (bluhammock) is the best album he’s ever cut, we speak with the authority of fans that have been there since the very beginning. Val Emmich is that rare artist whose songs have become more direct and honest as he’s continued to write. On Little Daggers, every detail is illuminating, and every chorus feels inspiring and instantly identifiable. Lead single “Get On With It” is Emmich at his very best: a bouncy, piano-driven verse, a radiant release, and a smart, succinct rhymes that manage to express great urgency and even greater warmth.

The “Get On With It” clip demonstrates why audiences find Val Emmich so endearing: he can express heavy emotions while maintaining his balance and his sense of humor. Like so many of Emmich’s songs, the video turns on a small detail – a wine-glass, falling in slow motion, off of a bar. The singer reaches out to catch it, and suddenly he’s transported to a high-school athletics field. Emmich is put through the paces of a mock obstacle course, leaping small obstacles, crawling underneath a rope contraption, swordfighting with a stray ninja, and challenging an intellectual to a game of speed-chess. It’s played for laughs, kinda – but when Val trips over the final obstacle, the referees and the cheerleaders desert him, leaving him alone on the grass. Everybody abandons him – except for the girl he was ever-so-tentatively flirting with back at the drinking-hole. She sits in the bleachers with a pennant, looking sweet as a cupcake. They make eye contact, and the spirit to keep on fighting returns with glorious results.

It is our greatest pleasure to be working with bluhammock music to champion another stellar Val Emmich video. We have in our possession a bountiful supply of Val’s new record Little Daggers, so be sure to get in touch for your on-air giveaway needs. If you need more info, call Andy Gesner at 732-613-1779 or e-mail us at info@HIPVideoPromo.com. You can also visit www.ValEmmich.com to find out more about Val Emmich.