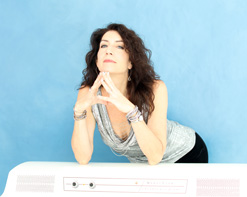 The Big Apple, The Empire City, The City That Never Sleeps – New York City has plenty of nicknames. But for Valerie Ghent, New York City is her home. Raised in SoHo and Greenwich Village, she was born into a musical family: her father, Emmanuel Ghent, was known to many as a pioneer of electronic music, and her mother, Natasha Ghent, performed with American Ballet Theatre and Queens Symphony. Practicing and writing from a young age, following a four year apprenticeship with UK record producer Mike Thorne (Soft Cell, ‘til Tuesday, Communards, Laurie Anderson, Wire) she went on to be the keyboardist/vocalist and recording engineer for renowned hit singer-songwriters Ashford & Simpson.

In 2016, Valerie released her fourth album Velours, to critical acclaim in the US and Europe. The song “New York City Streets” – now her second most played song on Spotify- is a love letter to her native New York. Locals are sure to fall in love with lines like, “This place that I call home is in my bones/ I couldn’t live without walking on New York City Streets.” But it’s not just New Yorkers that love the song: Gina Loves Jazz from Germany called the track “a real gem”, and France’s West Coast Radio says Valerie is “An artist to follow and discover without delay….soul-funk groove that reminds us of the heyday of Lisa Stansfield”.

With an infectious ebullience and a smile that lights up a city block, Valerie’s love of “the center of the universe” oozes from every frame. “New York City Streets” sizzles with an energy that’s undeniable! Filmed by Fredy Mfuko, Elisa Zazzera, and Tom Bisio, she’s right on target to say “Energy is coursing up from the street.” Valerie has taken to the streets of all five boroughs, and from Manhattan to Staten Island to Brooklyn to Queens to The Bronx, she takes the viewer on a compelling tour that will make any tourist feel like they’re right at home in this “city of dreams.”

As regular visitors of New York City, all of us here at HIP HQ are beyond thrilled to be working with Valerie Ghent to promote the “New York City Streets” music video! Whether you’re from the Big Apple or anywhere else in the world, we’re sure that you and your viewers will fully embrace this wonderfully crafted clip. In our book, Valerie is impossible not to root for, so please let us know what we can do to help secure a spot in your beloved programming for “New York City Streets”! Please contact Andy Gesner and the HIP Video Promo team at (732)-613-1779, email us at info@HIPVideoPromo.com or visit www.ValerieGhent.com for more info on Valerie Ghent.