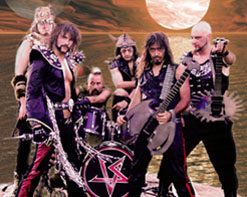 Pre-Spring salutations to all of my video programming friends! It’s Andy Gesner and the staff from HIP Video Promo with a band that commands your attention. Here in the Northeast, we’ve had such an unseasonably pleasant winter that it’s hard to believe that it’s almost time for Spring Break. But we know five guys who need no reminder: Palmdale, California’s hedonistic Van Stone. If the clip for “Spring Break Forever” is any indication, these party animals already have their beer bongs packed for the trip. Not since the heyday of Porky’sand dirty teenage sex comedies have grown men sounded so enthusiastic about crashing underage parties – and we mean that as the compliment we are sure Van Stone will take it as!

The Van Stone twins and their co-conspirators have found a sound that matches their perverse aspirations: full-bore, take-no-prisoners Eighties-inspired arena metal. Lonnie Van Stone brings the vintage power chording and riffage, and singer Randy – who has been known to do killer midair splits in spandex onstage – harmonizes with his bandmates with the tightness of prime Dio. The debut albumVan Stone I contains headbanging odes to beer runs, MILFs, wake ‘n’ bakes, and peaks (or troughs, depending on how you look at it) with a “big baller” anthem featuring this immortal singalong chorus: “our testacles/ ain’t symmetrical”.

Kidding around? Certainly. But there’s nothing inauthentic about the sound, and there’s nothing insincere about the sentiment: Van Stone really does want to come into your town and party down, and they’ve got the tour track record to prove it. “Spring Break Forever” is a hoot and a half, and it wears its parody proudly – when Randy Van Stone sings dramatically about puking and falling asleep on the beach, he’s inviting you to laugh at him as well as with him. Nevertheless, when the band comes crashing in like it’s 1985, there’s no question about it: Van Stone rocks.

Suitably, the clip for “Spring Break Forever” satirizes those “Girls Gone Wild” videocassettes and DVDs – right down to a faux-warning screen that cautions viewers that they’re about to witness the explicit antics of two “idiot brothers” from Palmdale. Indeed, the clip we’re sending you is the “censored” cut of what had to be a remarkably explicit original version: a Mardi Gras scene of topless coeds in frolic. The “Spring Break Forever” video you’re holding blurs the skin shots, but you’ll certainly get the point. There’s enough girly action here to keep Howard Stern satisfied, for a blue afternoon at least.

Van Stone nods to classic metal clips and Rock And Roll High School with an introductory scene of insubordination towards Teacher. By the time the crew hits the beach, the iconography has accelerated: if you’ve ever wanted to see a twelve-foot beer bong in action (and who hasn’t?), here’s your opportunity – it looks more like a log flume than a drinking implement. Randy and Lonnie live fast and party hard and they won’t stop until they are face down in the sand, clutching their beer can all the while. Most representative shot: the guitarist curled up in bed, lovingly holding a keg.

Here at HIP we are super stoked to be working with these irreverent songsmiths and assure you we will quickly cater to all of your Van Stone needs. Randy will be in attendance at SXSW and the band makes it triumphant return to the east coast to perform on Conan O’Brien and perform at this year’s Bamboozle. We have plenty of copies of Van Stone I for on-air givewaways so don’t be bashful about getting in touch. If you need more info, call Andy Gesner at 732-613-1779 or e-mail us at info@HIPVideoPromo.com.