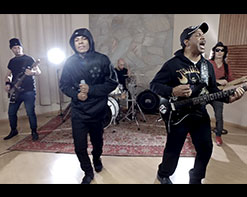 Vernon Neilly is an award-winning, chart-placing six string slinger, whose diverse and captivating style of music has attracted a myriad of fans worldwide. He’s also enchanted the big screen, appearing in blockbuster films such as “Along Came Polly” (Ben Stiller, Jennifer Aniston), “Starsky and Hutch” (Ben Stiller, Vince Vaughn, Owen Wilson),and “Walk Hard” (John C. Reilly, Tim Meadows)! You can probably tell already that this is a very accomplished artist and personality. Now that we have your attention, we’re pleased to bring you his scorching new music video “They Don’t Care,” from his new CD “Outta Time” (Boosweet Records.)

Vernon’s diverse and captivating style of guitar playing has afforded him the chance to record, produce, and tour with some of the most legendary names in the music business, such as Slash, Johnny Guitar Watson, Etta James, The Temptations, B.B. King, Steve Vai, George Clinton, as well as others such as Blink 182, Alien Ant Farm and too many more to list here! Vernon and his award winning CD’s have also been featured in magazines such as Guitar Player, Guitar World, Guitar One, Revolver, Japan’s Young Guitar and many more worldwide, establishing him as one of the premiere players of our day.

In his years traveling the world as a successful musician Vernon has seen many of the amazing things this planet has to offer, but he’s also seen enough nonsense and wholesale corruption to make any reasonable person’s head spin. For his new single “They Don’t Care,” Vernon has teamed up with his collaboration partner Khalif to pen a blistering rebuke to the powers that be.

The video “They Don’t Care” pulls no punches and takes aim directly at subjects of Vernon and Khalif’s ire; the heartless, power-hungry autocrats and plutocrats comfortably perched upon their golden thrones who have no care or concern for their hard working compatriots. Using a compilation of footage the shines the spotlight on the many ills of the world, it’s clear that the leaders of this world are the willing to sell out our individual well-being for their own good! Throughout the video Vernon and his band are spliced in, performing a blistering pass of the song. When the dueling guitar solos hit, the newsreel footage pulls away to give us a chance to focus on the fast fret work at hand. Even among all the carnage the stock footage lays out, there’s still a beauty in watching Vernon & co. light up the screen!

We’re all very excited to introduce our programmers and viewers to Vernon Neilly, and are here to do what we can to get this video into an abundance of programming. You can contact Andy Gesner and the HIP Video Promo team at (732)-613-1779, email us at info@HIPVideoPromo.com . You can also visit http://www.VernonNeilly.com/.