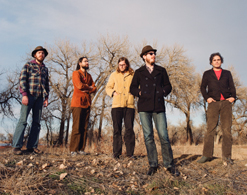 Howdy programmers, it’s Andy Gesner and the crew from HIP Video Promo, back with a clip from one of the most influential folk-rock bands on the planet. Joanna Newsom loves them. The sisters of Cocorosie have praised them. Devendra Banhart has worked with them countless times, and even written a song about them. Earlier this year, they joined genre godmother Vashti Bunyan on a collaborative tour. They’ve backed up Gary Louris of the Jayhawks and opened shows for the Black Crowes. They’re Vetiver – and when the history of American folk music of this decade is written, they’ll get the first chapter, and deservedly so. Their 2004 debut remains a landmark, and subsequent recordings have resonated deeply for musicians and serious music listeners alike. Perhaps no other band better represents the new naturalist movement – or gets more aesthetic mileage from traditionalism – than Vetiver does.

And if this wasn’t apparent on the band’s first two albums, Thing Of The Past, their heralded 2008 release, made their interpretive skills and their sense of history clear. It’s an album of covers – songs by folk legends like Derroll Adams, Ian Matthews, and Townes Van Zant, performed with sensitivity, warmth, and remarkable understanding by Vetiver. Storied fiddler and guitarist Michael Hurley sings on the set; Vashti Bunyan does, too. Vetiver frontman Andy Cabic’s appreciation for his antecedents animates all of the tracks, but he isn’t too shy to add his own nuances. That’s because Cabic understands what Thing Of The Past demonstrates – the timelessness, and indestructibility, of the great American folk songbook.

Tight Knit, the band’s latest effort, adds to that legacy. It’s a warm and engaging record: tuneful, bright, approachable, and frequently mesmerizing in its beauty. It’s also sweeter and more immediate than anything they’ve ever recorded before: Cabic proves on Tight Knit that he can render sun-baked California pop as convincingly as he can play acid-drenched folk. “Everyday”, the lead single, is empathetic, welcoming, and irresistibly catchy; it’s likely to be the song that introduces Vetiver’s music to a mass audience.

There’s another side of Vetiver, too: one that attendees at their concerts know well, but that hasn’t always been highlighted on their albums. The band has a terrific sense of humor. Their giddy streak is made overt in Jonathan Krisel’s hilarious clip for “Everyday”. It’s a mock karaoke video, complete with amusing titles (“laser sounds contemporary classics”, “suave rock 3”) and intentionally misspelled lyrics. The costumes are outrageous, too: they’re a reprise of the most dated fashions of the early Nineties. Tight spandex, rollerblades, leopard-prints, multi-colored vests; if it looks like a Rick Astley video to you, you’re in on the joke. There’s even a Jeep Cherokee pick-up scene, gratuitous use of a “Gin Doctors” vinyl LP, and an absurdist romance segment of the clip set in a bubblebath. Long-time fans of Vetiver won’t be surprised at the fidelity to the source material here – if they can approximate the sound of classic Seventies folk, surely they can give us a credible imitation of the follies of fifteen years past. Attention to detail: one of the many things that makes Andy Cabic so great.

Big thanks to Sub Pop Records for sending along another knock out clip for you and your viewers to enjoy! The band will be touring all over the US this Spring so definitely hit us up if you’d like to catch the band when they are in your market. If you can’t make it out to a show or video interview, we’ve also got plenty of copies of Tight Knit for on-air giveaways, so drop us a line! If you need more info, call Andy Gesner at 732-613-1779 or e-mail us at info@HIPVideoPromo.com. You can also visit www.SubPop.com or www.Vetiverse.com to find out more about Vetiver.