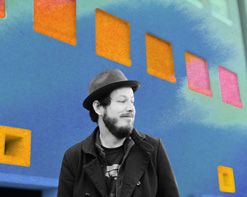 Greetings programmers! It’s Andy Gesner and the HIP Video crew, here with a superb soundtrack for an afternoon idyll from the mellow and emotionally subtle tone of Sub Pop’s folk rock masters Vetiver. “Wonder Why” is the sweet lemon iced tea to the hot summer day, perfectly breezy and upbeat, channeling a bit of Tom Petty and Paul Simon to set the new vibe your viewers will be riding on for months to come.

Vetiver is the type of band that keeps evolving, even with their fifth record. The group has received much critical acclaim for their last effort Tight Knit, which garnered excellent scores from major publications like Q, MOJO, SPIN, The New York Times and more.SPIN even named Vetiver as one of their “Hot New Bands.” Vetiver now takes the gentle sound that made their name and expands it with a dash of classic rock n’ roll in their fifth full-length release titledThe Errant Charm. The album’s unifying elements include the integration of drum machines and a washed-out, ambient guitar sound, peppered with jangly flourishes. The record has made a splash with Pitchfork and Rolling Stone, who gave rave reviews.

The bright guitars and muffled drums define the radiating warm rays of “Wonder Why” as it massages the eardrums, allowing a listener to drift away into its atmosphere, without constantly nagging him or her for attention. This humble creature is the perfect shelter from the storm of loud and obnoxious radio monstrosities that have been assaulting our ears all year round. However, don’t let this description mislead you from the fact this song does, in fact, contain some extremely catchy Beatle-esque vocal melodies that will you have humming long after your first listen. To keep things equally sunny in the visuals, Vetiver creates a video that is guaranteed to make you smile, or, in the most cynical cases, at least flash a smirk! Building walls, fire hydrants, food carts, and many other urban environments come to life with facial expressions in “Wonder Why.” Every scene has a hidden face that winks, blinks and sings along to the tune, whether it’s two windows, some electric meter, or a bumper that forms humanizing features on otherwise lifeless objects. Cleverly done in stop motion, Vetiver literally brings an entire city to life!

We are thrilled to bring you yet another Sub Pop gem that will luster amongst your video lineup. Vetiver is currently touring the UK, but will return to the US shortly thereafter. So we urge you to file your requests for interviews and copies of their record for giveaways straight away. We have plenty copies of the new album available for you to check out, so please do not hesitate to ask for it. If you need more info, call Andy Gesner at 732-613-1779 or e-mail us at info@HIPVideoPromo.com. You can also visit www.Vetiverse.com or www.SubPop.com to find out more about Vetiver and the tour dates near you.

For info on the previous Vetiver video “Everyday” click HERE