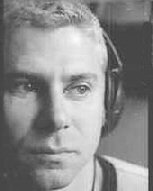 Hey everyone! It’s Andy Gesner and the staff here at HIP Video Promo with another eclectic and thoroughly engaging video for your viewing pleasure. It has been our goal since our inception three years ago to provide you with a varied selection of music videos to appeal to the widest audience possible in your particular market. That’s why we felt the insatiable urge to champion this cool one.

We often refer to music videos as “mini-movies,” and you’ll seldom see a better example of this than “Meditation No. 6” from NYC’s Victor E. The Los Angeles Film Festival even screened it as a short film this summer. His debut album, The Meditations, has already generated college radio interest throughout the US and Canada, including trendsetting KCRW in Los Angeles. Victor E. wrote all the songs, played most of the parts, and co-produced the entire album with a little outside help.

“Meditation No. 6” has a real 1980s feel to it, a throwback to the salad days of MTV. The video was shot in Los Angeles on 35mm film by critically acclaimed director and “Spirit” award nominee Lisanne Skyler on location at a steel processing plant. The action sequences feature 35-ton stacked steel coils which required a safety crew on set at all times. It starts off looking like 1984 or Brave New World, with a visual debt to Fritz Lang’s Metropolis. Skyler quickly brings in several comedic touches and strikes a delicate balance between the repressive and the risible that continues through the rest of this action-packed video. The method is simple but remarkably effective – a series of classic sight gags shot in an ominous and foreboding industrial atmosphere. Ultimately, the hero is able to make his escape (on roller skates, even) from the overseers in their comic opera uniforms and the keepers/nurses who turn out to be Bond-girl wannabes. In true Wizard of Oz fashion, our hero learns he had the power within him all along.

Musically, “Meditation No. 6” (and The Meditations as a whole) is a richly woven texture of keyboards and percussion, precisely and delicately arranged. The tempo is upbeat but unhurried, and Victor E’s vocal performance is soulfully understated. Echoes of legendary songsmiths like Prince and Bryan Ferry permeate throughout “Meditation No. 6” and the sassy sensuality of Victor E. is evident in his voice, musical aesthetic and boyish playfulness.

Victor Ernesto was classically trained in voice, flute, keyboards, composition, and movement at New York’s Manhattan School of Music. He was signed to Polygram as a solo teen artist for a dance record that was shelved and never released. Victor later formed the band Inviolate, which regularly played to sold-out audiences around New York opening up for soul stars like platinum-plus selling Zhane and Roy Ayers, and cutting-edge artists like Joi and Brooklyn Funk Essentials. Victor E. returns in his first full-length solo effort mixing orchestral pop, bossa nova, and drum & bass. Assisting on production are Warren Rosenstein of The Jazzhole, and drum-and-bass turntable whiz NovaSoulo.

For copies of The Meditations, video ids or video interviews, call Andy Gesner at 732-613-1779 or e-mail info@HIPVideoPromo.com. We are here to make sure that all your Victor E. needs are fulfilled.