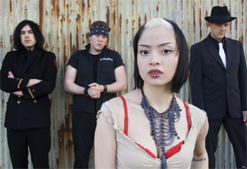 Hello to my fellow music enthusiasts, it’s Andy Gesner and the staff from HIP Video Promo, here with another provocative clip from a superb band that’s just started to make their mark on the musical landscape. We’re thrilled to be working again with Bodog Music to spread the word about another of the excellent groups on their roster. That’s because our friends at Bodog don’t care about genres or classification – all that matters to them is star quality. They understand that it’s not where you fit in, it’s how you stand out, and Cassandra Ford of The Vincent Black Shadow cuts a high profile in any crowd. With her pale skin, red hair, red lips, and movie-star curves, the Canadian frontwoman looks the part of a video lead; she captivates the camera, dominating every frame she graces.

As you might expect from a band named after the mystic vintage motorbike that cut a trail through Hunter S. Thompson’s fiction, The Vincent Black Shadow makes music that’s sleek, energetic, often stylishly retro, and always at least a little dangerous. “Metro” rocks for sure, but the melody line is doubled by a modulated Farfisa. It’s garage-y, trashy, reminiscent of The Cramps at their carnivalesque best, and when Ford spits her staccato verse melody over the top of the mix, the track slashes like a scalpel. The rest of the group locks in and plays with a tightness and mutual familiarity that might strike a casual listener as downright uncanny – until he checks the liner notes and notices that they’re actually related! The brothers Kirkham – Chris, Anthony and Rob – rock the bass, drums, and lead guitar respectively.

Fear’s In The Water draws from sources that most bands don’t even know about, let alone incorporate into their modern rock mixes: noir soundtracks, early 20th century cabaret, pre-bop jazz, contemporary Asian pop. Lest you worry that you’re about to get an overly arty project, they’ve liberally applied their considerable knowledge of Eighties alt-metal and Eurotrash to the songs as well. Their striking visual aesthetic hits at all of these influences: the sharp black-and-white suits of the bandmembers hint at ska and the speakeasies, and Ford herself is as comfortable in her burlesque-vamp persona as she is in headbanger’s clothing. The Vincent Black Shadow has created a stage show that’s as colorful as their sources, and they strutted their stuff on the Pink Stage of the Warped Tour this summer and across Europe on the Bodog tour this autumn; later this October, they’ll invade NYC to play a showcase at the CMJ Music Marathon.

The clip for “Metro” shows off some of that explosiveness – and plenty of Ford’s sexiness. The band looks terrific, styling like some visionary amalgam of swing-era cool and contemporary edge. The lead singer appears in a four-poster bed, fully dressed, but suggestively attired. Black vines curl around the frame, and Ford attempts to battle back the menace. Much of the color in the bedroom shots has deliberately been washed out, the better to focus on the flashes of red in Ford’s hair. As the camera flashes between focuses, the frontwoman purrs at the camera, leading on the viewer with her lipsticked pout.

We are pleased to be working again with all of our friends at bodogMUSIC!! Bodog has given us the great pleasure of working with some of our favorite bands and artists (Bif Naked, Neurosonic, Britt Black, Dead Celebrity Status) over the past year and we are glad to be teaming up with them once again! We will have a stockpile of Fear’s In The Water  on hand for on air giveaways and contests. If you are planning to be in NYC for this year’s CMJ Music Marathon in early November and would like to check out The Vincent Black Shadow live, please get in touch and we’ll make sure to arrange for you to see them perform! If you need more info, call Andy Gesner at 732-613-1779 or e-mail us at info@HIPVideoPromo.com.