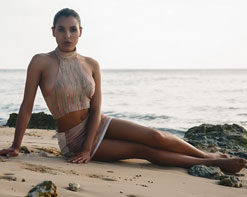 We have nothing but admiration for pop musicians who sign with major labels and work within the system. But we’re particularly inspired by artists who take charge of their own careers and call their own shots — and succeed on those terms.  As a teenager, Toronto pop singer-songwriter Vita Chambers toured with Justin Bieber, appeared at the Lilith Fair, scored mainstream Canadian pop hits with “Young Money” and “Like Boom,” and announced herself as an artist on the rise. Stardom seemed imminent. Yet when industry insiders tried to mold Chambers to fit their image of who she was, she told them “no thanks.” Vita Chambers became an independent artist — one dedicated to following her own musical vision — and she’s been rewarded for her courage.

“Fix You,” Chambers’ propulsive and passionately-sung 2013 hit single, was a product of the artist’s new-found independence. The record, which has sold over 350,000 copies worldwide, earned Chambers a Juno nomination. “What If?,” the sizzling follow-up, was similarly praised, scoring Chambers two nominations at the Canadian Music Radio Awards in 2014. Both records reintroduced Chambers as a dance-pop songwriter of great flexibility, empathy, and sophistication, and the cinematic clip that accompanied “Fix You” showcased the star’s stunning beauty and comfort in front of the camera.

Now comes “His Love,” Chambers’s most irresistible recording yet, and the clearest expression of the personal sound she’s been developing since her declaration of independence. Internationally-renowned pop producer Denzil Remedios matches Chambers’s sultry voice with music that swirls and oozes like hot caramel. “His Love” feels likely to establish Vita Chambers as a north-of-the-border answer to Ellie Goulding: a dance-pop voyager whose music fits the club, the radio, and the bedroom equally well.

Sam Martini’s clip for “His Love” foregrounds Vita Chambers’s physical allure: his camera finds her applying makeup and perfume, and lounging seductively in the bathtub. There’s a man in a sharp sport jacket after her, and while it’s not exactly clear that he’s bad news, there’s an aura of trouble around him that Chambers is drawn toward. Even when she’s running away, she’s got a watchful eye on him and a half-smile on her lips. Martini shoots the whole clip in slow motion, and washes his frames with pink and purple light — a perfect visual accompaniment to the artfully-smeared sound of Remedios’s synthesizers. It’s a clip that speaks in the language of infatuation, and one that’ll resonate for anybody who has ever been swept up in a dangerous romance.

Here at HIP Video Promo, we’re all incredibly excited to have the chance to work with Vita Chambers and the entire Goldnote Productions team. We’re confident you and your viewers will be quick to embrace this video, but please don’t hesitate to be in touch if you need anything at all from us to help make that happen. You can contact Andy Gesner and the HIP Video Promo team at (732)-613-177 or email us at info@HIPVideoPromo.com . You can also visit http://www.VitaChambers.com/ or http://www.Facebook.com/VitaChambers/ and you can purchase “His Love” here: https://vitachambers.com/shop/vita-chambers-his-love/ and here: .