Voxhaul Broadcast “Leaving On The 5th” 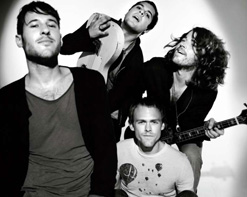 Greetings programmers! It’s Andy Gesner and the HIP Video crew, headed your way with a handful of muddy indie rockers that will not only become your favorite new band this summer, but have a sound so big, so perfectly dangerous, that they just might explode in your hand! Voxhaul Broadcast is a tastemaker’s wet dream, having written a song that is as cool as it is sharp with hooks in its prerogative. We welcome you to experience “Leaving On The 5th” starting right now.

“Leaving On The 5th” is the leading single from the band’s debut full-length, Timing Is Everything. Produced by Grammy Award winning producer Tom Biller (Silversun Pickups, Seawolf, Liars) with additional production from Chris Thorne (Blind Melon), Timing Is Everything showcases what happens when great songs get the 5-star production treatment without abandoning their core. The band’s sound is obviously magnetizing, as national press is already falling in love with how Voxhaul Broadcast seems to hit the nail on the head in all departments.Huffington Post claims that Voxhaul Broadcast is “a quartet that mixes psychedelic, rock and soul into one perfect pitch.” Nylon describes the band as “one pretty awesome package.” The folks at AOL Spinner describe the record as “a melodic opus to serendipitous love and chance meetings” and featured the “Leaving On The 5th” video on their front page. Village Voice, LA Times, LA Weekly, NY Press, and iTunes Music all also join to praise the band and their infectious grooves. Voxhaul Broadcast is currently touring the United States this summer in support of their record. If you’d like to catch the band live or set up an interview, please reach out to us right away!

Voxhaul Broadcasts hijacks radio friendly pop and beats it to bits with a stiff serving of indie rock. “Leaving On The 5th” employs a growling dirty synth beat that could sit at home on an MGMT track, but never lets it off the leash from the pounding drums and riffing bass. However, what truly makes this number so meteoric is that the main hooks come from the slap-back delay of the arena ready guitars and vocals. It’s truly a rarity to achieve a sound that is so raw and polished all at the same time, summing the Springsteen spirit and distorting it with a Kings of Leon fuzz.

We couldn’t be more excited to bring you a video truly begging for your coveted attention. Your viewers will be head-over-heels for Voxhaul Broadcast. We have plenty copies of the new record available for you to check out, so please do not hesitate to ask for it. If you need more info, call Andy Gesner at 732-613-1779 or e-mail us at info@HIPVideoPromo.com.