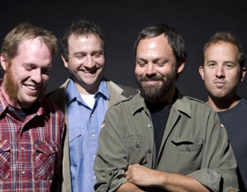 Hello friends! It’s Andy Gesner and the staff from HIP Video Promo, here with a clip that gives new meaning to the phrase “kitchen sink drama”. Get ready for a playfully bizarre video in which the members of Vulture Whale each play a different fruit or vegetable locked in mortal combat with a sinister bag of sugar. No costumes in this one – rather, the heads of the musicians are superimposed atop an apple, a sweet potato, a pear, and an artichoke. This allows the director to shoot the healthy snacks in their natural habitat: the refrigerator, the kitchen counter, and the microwave oven.

But even on the icebox shelves, Vulture Whale still rocks. Okay, so they’re using plastic knives and forks in the place of their guitars, and they don’t have arms to play their instruments with. They’re still set up in band formation, and they’re singing their heads off. It’s the only way the Birmingham, Alabama quartet knows how to go: they play it rough and direct, with ramshackle drumbeats, sandpaper guitars, casually provocative lyrics, and hooks so irresistible you won’t mind being snared on them. Ask anybody who has attended one of their Birmingham-area shows – Vulture Whale grabs listeners by the collar and sets them spinning.

As you might guess from the video, the band has a great sense of humor, too. Singer and principal songwriter Wes McDonald addresses listeners conversationally, telling his stories with wit, self-deprecation, and an eye for revealing detail. Vulture Whale, the band’s upcoming sophomore release, collects McDonald’s punchiest songs yet – like the music that accompanies them, his stories are raw, direct, immediate, and compelling. Vulture Whale plans to spend ’09 spreading the word about the set; they’ll play all their favorite clubs in the Middle South during the winter, and plans are in the works to bring the band’s energetic stage show to the rest of the United States.

McDonald is the star of director Alexander Kranzusch’s debut clip for “Sugar” – and the fruit-warrior who finally vanquishes the sugary foe – but the other members of Vulture Whale get plenty of screen time, too. Each is defeated by the sack and its sugarcube minions: the pear is bitten, the sweet potato is sliced, and the artichoke is stuffed into the oven. These scenes are played for laughs, of course, but they’re also weirdly affecting – when the “sweet potato” is chopped into pieces with a kitchen knife, there’s real dark drama underscoring the absurd. McDonald plays the apple, and he rallies after getting knocked into the sink: he takes the weapon that sliced up his bandmate, and stabs the bag of sugar squarely in the chest. The guts of the sack (Al’Bama brand, in case you were wondering) spill out all over the counter, and the apple returns to the refrigerator alone. The stop-action animation makes the drama feel trippy, ragged, and occasionally nightmarish, but that only enhances the strange allure of the clip. Proof positive that big-money special effects aren’t necessary to tell an adventure story, and that the heroism (and villainy) in ordinary, everyday objects isn’t all that difficult to expose.

It is a distinct pleasure for us to come together with Travis Morgan and the Skybucket Records crew to bring you this dastardly clip! If you need more info call Andy Gesner at 732-613-1779, or email infoHIPVideoPromo.com.