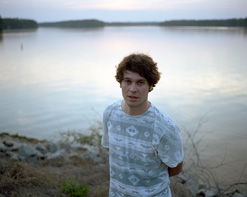 We’ve got one of the coolest new artists on the Sub Pop roster hazily floating your way, programmers! It’s Andy Gesner and the HIP crew here with a brand new video from the bustling underground indie chillwave scene’s most prominent and talked about new group – Washed Out. Feel free to abandon your inhibitions and responsibilities to take a solo trip across Iceland in “Amor Fati.”

Washed Out has become this year’s most talked artist in the chillwave music scene, a massively growing genre defined by dreamy indie pop. What makes Washed Out’s Earnest Greene so unique? It’s quite simple, really – he does it best! What started as a hobby to cope with the nation’s unemployment dilemma, turned into a rapidly rising music career, as Greene unassumingly posted some bedroom-recorded songs online that spread like wildfire. A remarkably impressive feat of songwriting and production given Greene’s means at the time (essentially little more than a laptop, sample bank and microphone), the songs of his debut EP, Life of Leisure, saw him, alongside friend Chaz Bundick, AKA Toro y Moi, and the more established likes of Ariel Pink and Panda Bear, designated leader of a newly emerging DIY movement identified by David Keenan of The Wire magazine as “hypnagogic pop” for its romantic, retro-futurist re-imagining of pop music past.

After teaming up with the always trendsetting folks at Sub Pop, Washed Out, now a five-piece group, is making their way into a much bigger stream of nationwide listeners. The new record, Within and Without, has garnered a legion of diverse fans, including ex-Hüsker Dü frontman Bob Mould, who’s worked Washed Out into his DJ sets, and actress Jessica Alba, who’s tweeted about his “groovy tunes.” The album was co-produced by inventive hit producer Ben Allen (Animal Collective, Gnarls Barkley). The record recently landed at number 26 on the Billboard 200, as well as hit the UK Albums Chart. Washed Out has supported Beach House and Yeasayer on the road, and has also appeared at The Pitchfork Festival. A Washed Out song is also in the opening sequence of the TV series Portlandia.

“Amor Fati,” premiered by Entertainment Weekly at the end of September, is a prime example of what makes Washed Out’s sound so outstanding. Pitchfork, who gave the record a high mark, describes it as “Public Enemy drums creeping through Madonna’s ‘Justify My Love’, and there’s a lush, snowy warmth to the production.” Still unconvinced? SPIN, scored the record as 9 out of 10, an impossible rarity reserved for the best records of the year. Rolling Stone, Stereogum and many others are following suite. The video finds Greene’s stand-in (fellow musician Luke Rathborne) taking a solo road trip through Iceland, driving along country paths, chasing livestock, taking a bath with a beautiful woman, engaging in some verbal foreplay with a hot dog vendor, and generally re-creating the hallucinatory sense of awe and alienation one gets on an extended foreign vacation.

Thank you to the keen people of Sub Pop for bringing us one of our favorite bands of the year. We’ve got copies of Within and Without for you to get your hands on, so reach out for any requests. If you need more info, call Andy Gesner at 732-613-1779 or e-mail us at info@HIPVideoPromo.com . You can also visit www.SubPop.com or www.MySpace.com/thebabeinthewoods to find out more about Washed Out and all the tour dates this fall.