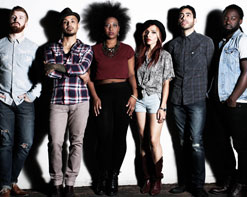 One month ago we put out an open call to the wealth of artists on Reverbnation to share with us their music videos and we would pick the best of the best to share with our cherished programmers. When we received the new “No” video from L.A.’s weareTheBigBang we immediately said “Yes!” Is that a bit of a cliche that the band has probably heard many times before? You bet it is, but it’s for good reason.

This soul shaken’, groove making, alt soul band invokes the spirit of contemporaries such as Allen Stone, Vintage Trouble, and Fitz and the Tantrums to knock out a sound that has gripped audiences and critics alike. In both 2013 & 2014, Music Connection Magazine named the band as “one of the best unsigned bands to see live.” They’ve also had the opportunity to get groovy at Bonnaroo, Coachella, SXSW, Make Music Pasadena, Kiis FM’s Wango Tango music festival and a private event held by the Recording Academy.

“No” is a video that will really work up a sweat (literally) and the perfect example of their unique and alternative take on soul infused indie pop. This humorous clip is based around the rigorous “No Lifestyle” of the fiery and energetic fictitious T Wash Washington. His mission is to promote his “extremely effective, super genuine” No Lifestyle diet. It begins in a dance studio where T Wash pushes the band to their physical limits through a mix of encouragement and intimidation. Mostly intimidation. Next up is the diet, which is essentially the absence of any enjoyable cuisine. Though his wardrobe is slick and his physique is tight, he’s just another fraud and the band sees right through him. After chasing T Wash out they take matters into their own hands. And guess what? They’re stellar just the way they are. With tongue firmly in cheek, this video is an absolute thrill to watch!

The band can now be heard on numerous local/ internet radio stations (including Kiss FM in NYC and Utica), in the air if you happen to be flying Delta Airlines, and on TV (VH1’s Mob Wives, Single Ladies, Love and Hip Hop, MTV’s Jersey Shore, Teen Wolf, and Snooki and Jwoww, TNT’s Boston’s Finest, Lifetime’s Dance Moms, the CW morning news, and many more). Trust us, this is not a band you want to miss getting in on the ground floor with! Please contact Andy Gesner and the HIP Video Promo team at (732)-613-1779 or email us at info@HIPVideoPromo.com .