We The They “Pastures” 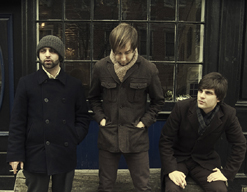 Hello video programming community, it’s Andy Gesner and the staff from HIP Video Promo. Musical fashions wax and wane, but hooky songwriting never goes out of style. The safest formula for musical success has remained the same for the past fifty years: strong melodies, tight pop song construction, singalong choruses, passionate and winning performances. But We The They aren’t following anybody’s playbook – they’re just big believers in the power of classic pop-rock. The members of the Long Island quartet draw inspiration straight from the greats: The Beach Boys, Del Shannon, ELO, Ray Davies, CSN&Y, and dozens of sparkling doo-wop and early R&B groups from the late fifties. It is no wonder Keifer Sutherland buys them drinks, they are the only indie band endorsed by the best selling instrumental group of all time, rock hall of famers and surf pioneers, the Ventures, and fellow indie rocker Blaine Thurier of the New Pornographers sings their praise! Like the renowned Vancouver supergroup, We The They keep their harmonies sweet, their tone exuberant, and their hooks front and center.

Thurier isn’t the only one singing the band’s praises. Darren McLeod of Absolute Punk raves about the We The They, calling their music a throwback to “a time when rock wasn’t something that you could force yourself to dance to, but demanded that you dance to it.” They’ve become favorites on the local club circuit, and overseas airplay has built the band a solid European following. Appropriately, they’ve recorded with Roger Greenawalt, who has made recordings for some of the most prominent members of Brooklyn’s pop royalty, including Ben Kweller, Albert Hammond, Jr., and The Pierces. Their recordings with Greenawalt are bright, catchy, hummable, rootsy, and instantly engaging.

“Pastures”, their current single, is about the best of them: a raucous Americana bop with a subtly suggestive lyric. The vocal harmonies are rich and close, the drums bounce and snap, the guitars jangle, and the melody, once heard, isn’t soon to be forgotten. It’s a song that could have been a hit in any year since the advent of rock and roll, and it is sure to be a blast of s onic sunshine for daylight-deprived listeners this winter.

Videomaker Graeme Pearce is a relatively new face behind the lens here in the US, but in Europe he’s already developed a signature style – two-dimensional animation that feels like 3D storytelling. His filmed work often takes on the character of dioramas in motion: it’s colorful, communicative, direct, and engrossing. The clip for “Pastures” was drawn, animated, and directed by Pearce, and his whimsical tone perfectly matches the breezy, infectious quality of We The They’s music. Two-dimensional representations of the bandmembers are shot inside a diorama stage decked out like an old Western theatre. The play, too, is vintage penny-in-the-crank-machine stuff: Despite the best efforts to take her away, frontman Robert Wayne Valenti is here to save a damsel in distress. (In fact, it’s the same damsel, over and over.) He rescues her from an oncoming train, from a stock baddie with a gun, a renegade balloon ride, and other quintessentially Wild West predicaments; there’s even a remarkably engrossing 2D gunfight, complete with a cameo from a bow-wielding American Indian. That they do all of it while singing is a testament to the band’s style – and Pearce’s skill.

We are thrilled to be working with We The They to promote the “Pastures” video to the fullest. We are also in possession of numerous copies of the new CD Shabby Road Sessions, so don’t hesitate to reach out for all your contest and on-air giveaway needs. If you need more info, call Andy Gesner at 732-613-1779 or e-mail us at info@HIPVideoPromo.com .