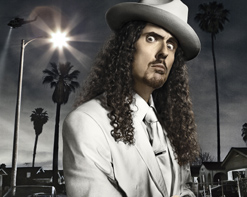 Get ready music video lovers! It’s Andy Gesner and the staff from HIP Video Promo, here with a super-sized helping of clips from the undisputed king of contemporary musical satire. Think back to the artists on the charts during the early eighties – Cyndi Lauper, Toni Basil, The Knack, Stevie Nicks, and the rest of the original darlings of music television. These were the original subjects of “Weird Al” Yankovic’s parodies. Many have retired from making commercial music, others have receded from public view altogether – but “Weird Al” keeps right on hammering away at our popular culture, and delighting audiences of all ages as he does. In the Nineties, Yankovic scored hits with his send-ups of Nirvana, MC Hammer and Coolio; they’re all gone, and he’s still a Billboard regular. Weird Al has now had a longer career than R.E.M., U2, The Smiths, or Pearl Jam, and he’s been at it more than twice as long as The Beatles were together. Barnes & Barnes only recorded four albums of original material, Tom Lehrer managed three; the bestselling Straight Outta Lynwood, by contrast, is Al’s twelfth full studio set.

What’s the secret to the satirist’s remarkable longevity? Well, for starters, there’s no denying that Weird Al is funny as hell, and stealth-sophisticated, too. He tells jokes that an eight-year-old can pick up on, but are intriguing enough to trouble the brains of intellectual music listeners. Behind the silliness and splashy appeal of his over-the-top parodies, Al deals in existential issues: food, consumption, religion, celebrity and obscurity, and the relationship between mass culture and mass communication. Kurt Cobain called Yankovic a genius, and there’s less distance between the Nirvana frontman’s condemnation of modern society and Al’s tongue-in-cheek savaging of cultural icons and iconography than you might think. Weird Al’s an underdog and proudly geeky, too; he loves poking fun at tough-guy pretensions and masculine archetypes, and he’s become a hero to every clever kid who uses words and humor to fight back against bullies. Then there’s the fact that Al truly does love all the music he satirizes, and his band’s re-creations of the songs he’s spoofing (and the style parodies, too) are rendered with great attention to sonic detail. There’s a good example right here on this reel: check out the clip for “I’ll Sue Ya”, a clever exposé of the deep absurdity that underpins rap-rock aggression. The Weird Al band nails the RATM sound and stance perfectly – right down to the distorto six-string, the high “ping” of the snare, and the singer’s hyper-dramatic delivery.

By now, you’ve surely seen the video for “White & Nerdy” – a song that very nearly became as big a hit as the chart-topping Chamillionaire anthem it parodied. (The Houston hardcore emcee was impressed enough to put the clip on his own MySpace page, and he even went so far as to praise Yankovic’s microphone skills.) The clip, with its litany of geek clichés and frantic cuts, became one of the best-loved and most-requested MTV videos of last winter; certainly it was the funniest as well. But Yankovic and his pals had bigger plans for the clips on Straight Outta Lynwood: he threw the doors open to several prominent video artists and animators, asked them for their interpretations of his tracks, and bundled the results along with the CD. For the “We Are The World”-like “Don’t Download This Song” – a broadside against the hypocrisy of the RIAA and superstar performers who rail against Internet file-swapping – the legendary Bill Plympton contributes a wonderfully macabre spot about a young music pirate on the run from the international police. “I’ll Sue Ya” finds an animated Al in concert, in torn tie and businesswear, angrily berating an equally irate crowd of would-be litigators. The Jibjab-directed “Do I Creep You Out” casts the Tyler Hicks ballad as a stalker’s confession. All four clips are uproarious, and will surely be added to the list of Yankovic classics (“Amish Paradise”, “Hey Ricky”, “Eat It”, “Smells Like Nirvana”, too many others to list).

In many ways, Weird Al’s history is the history of music television and rock videos: by consistently satirizing the most popular clips in America, he legitimated their cultural impact, and proved that this new medium could have a sense of humor about itself. Yankovic’s clips have been some of the most memorable ever made, and he shows no signs of slowing down – in fact, considering the popularity of homemade spoofs and send-ups on video-sharing sites, it could be argued that the rest of the world has finally begun to catch up. Weird Al is a legend and a landmark, and we’d like to say we’re beyond thrilled to be able to work with him, but that seems demeaning somehow. With Al, nothing ever feels like work..

We are very psyched to reconnect with our old pal Dan Mackta and the teams at Volcano Entertainment and the Zomba Label Group to bring you this video collection of comedic gems! All of these songs and more are included on the CD/DVD of Straight Outta Lynwood, which we have plenty of copies of for all your on-air giveaway needs. Weird Al will be spending the duration of the spring and summertime on tour across the country, and we can promise he will be hitting your market! The best part? This campaign is all about YOU, and Weird Al is ready, able and willing to do video interviews with all of you! Let us know if you’d like to get in on this action or get your hands on some copies Straight Outta Lynwood! If you need more info call Andy Gesner at 732-613-1779, or email info@HIPVideoPromo.com . You can also visit www.WeirdAl.com to find out more about “Weird Al” Yankovic.