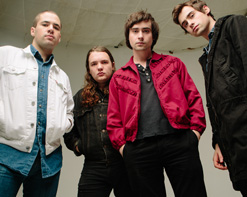 “It’s not bragging if you can back it up.” These words were famously said by Muhammad Ali, a man who defined confidence.  You have to be pretty confident to reap a title like The World’s Best American Band, exactly what White Reaper has titled their sophomore album. Coming from the same hometown of Louisville as the boxing champion (maybe it’s something in the water?), this all-star band has raised the bar for themselves. The last time we worked with them in 2015, they were amazing audiences with their power-packed performances that hit like an adrenaline shot, touring nationally in no time from the start of their musical debut.  Like a raging riot, White Reaper Does It Again, an ironic title for a first album, earned them a respected seat in the high-stakes world of rock ‘n’ roll.

After a long tour throughout the States, this Louisville rock group is stoked to release their sophomore album filled with a variety of instrumentation that’s wholly different from the vigorous energies of their debut album White Reaper Does It Again.  The band has been rousing up attention at festivals like Project Pabst, Mo Pop Festival, and Bonnaroo, plus they’ve announced their attendance at Cal Jam ’17 after being personally selected by Dave Grohl to perform, Pitchfork’s Avant-Guarde Music Festival, Austin City Limits Music Festival, and Lollapalooza later this year. All this on top of their cross-country tour with numerous sold-out shows proves this band can “back it up.”

Their lead single from the new album is called “Judy French,” audacious and perfectly frisky for this young band.  Alexandra Daddario, from ‘Baywatch’ and ‘San Andreas,’ becomes White Reaper in this clean studio video directed by Brandon Dermer. Reminiscent of the White Stripes, Alexandra dons frontman Tony Esposito’s signature white denim jacket while singing and playing a guitar garnished with American stars and stripes. Throughout the video, she takes the place of each band member in their exact clothes and instruments, literally becoming the band.

The greatest American band in the world? We definitely think so! We here at HIP are so excited to be working with this killer act yet again, and it’s been a pleasure watching them grow and continue to put out new varieties of music with our good friends at Polyvinyl Records. The band continues it’s summer tour into the fall; you can check out tour dates on their website! We would love to get you out to see the band live, so please let us know if you’d like to make that happen. You can contact Andy Gesner and the HIP Video Promo crew at (732)-613-1779 or email us at info@HIPVideoPromo.com. You can also visit www.WhiteReaperUSA.com or www.PolyvinylRecords.com for more info on White Reaper.

For info about other White Reaper music videos, click HERE