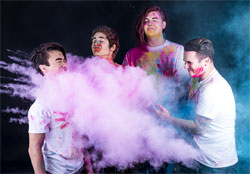 Who is Who We Are? This Los Angeles band is mainly composed of members aged sixteen to eighteen, but they come off as old souls. Taking a different path in life is not a stranger to these devoted followers of the craft- which sets them apart from any other pop-punk band. With a clear vision of what they would like to achieve, they are bound to reach and exceed their goals before they even hit the legal drinking age. All having paths of their own, they come together to tell a collective story that has passion behind it while still remaining unafraid to be vulnerable.

Who We Are was born in 2016 and is composed of Nikko Solorza on vocals, John Warren on guitar, Robby Craig on drums, and Jeremy Greenberg on bass. Robby is actually the odd man out at age twenty-five and acts as their main mentor. They also have a great production team including Johnny Young from Message to The Masses and Nicki Morzov from The Night Game and Dan and Shay. Off to a great start, these guys have always wanted to produce music with some members trying to break into the business at age fourteen. Vocalist Nikko was actually sixteen when he joined the band and his struggles with his father influenced their first self-titled EP, Who We Are. Nikko’s father was diagnosed with cancer which brought up a lot of emotional turmoil and frustration for the singer while he was struggling to balance where he stands within himself and his family. This is highlighted in the video for “Memory” and it showcases the anxiety of growing up in a time of hardship and struggle.

“Memory” is the band’s first official video and showcases not only the song but the members’ stories. The video centers around Nikko trying to mend the relationship with his family but submits to failing. Directed by Johnny Young – through whom the band were able to collaborate with Escape the Fate guitarist Kevin Thrasher- in the San Fernando Valley in California, the video opens up to text messages from his dad telling him to come home but instead, he takes a nice drag race around town. Clearly upset with their son’s disobedience, Nikko’s parents call out for the son they once knew. Teenage angst is certainly highlighted as his parents try to save him before he self-destructs. He is unaware of the consequences to his actions, eventually accepting the fact he is a disappointment and can’t change which leads him to spiral. Eventually, he has to drag race his dad- showing the son that they are actually very alike and he sees himself in him. All along they were just trying to look out for him but the angst of growing up and not knowing who he was added to his discontent and pushed him past his limits. With extremely heavy lyrics, they are open books that give the listener the opportunity to attach their own meaning to their songs.

Here at HIP, we’re absolutely elated to be working with Who We Are. We hope you enjoyed the clip for “Memory” and will add it to your programming in a timely fashion! Rest assured we’ll have plenty of Who We Are merch available to set up online / on-air contests and giveaways throughout the campaign so please don’t hesitate to get in touch. Please feel free to contact Andy Gesner and the HIP Video Promo team at (732)-613-1779 or email us at info@HIPVideoPromo.com. You can also check out www.instagram.com/ThisIsWhoWeAreOfficial for recent updates on Who We Are and more info at www.Facebook.com/WhoWeAreOfficial.

Visit Who We Are