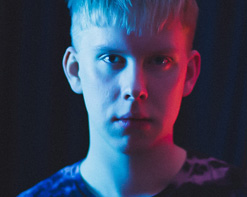 Whether you’re a public figure or on a first date, first impressions are everything. People make initial judgments whether they realize it or not, so setting your best foot forward as a new artist in the opinionated world of music is vital. Tucked away in the heart of Sweden is an untapped wealth of artistic potential by the name of Carl Gränsmark, better known as Whooda Thunk. With his new single “Used To,” Whooda Thunk is ready to make his most important first impression to date: his American debut. He’s cultivated a perspective – and a sound – unique in contemporary rock. It is, as you might expect from a person of his background, exuberant, searching, dynamic, and dream-haunted.

At the age of 14, Carl was swept off his feet by music. Writing and producing his own bedroom demos, he started dipping his toes into the fountains of creation. It was at this very moment of artistic genesis when he met Rickard, another kid in school with an unhealthy obsession with bands like Korn, Aphex Twin, and Slipknot. For the past seven years, Carl and Rickard have been honing their skills together in numerous musical projects, taking influence not only from the bands that introduced them to music, but also alternative art and films like Donnie Darko, which accompanied them through the trials and tribulations of growing up. With their coming of age, Rickard has fallen into a managerial role, where he can apply his wit and brawn, while his brother in arms focuses on expounding upon the quintessential Whooda Thunk sound.

But it wasn’t until Carl fell on some hard luck that he found a writing style that was solely his. Just like when he was a kid, he was writing and producing tracks, but this time he had been sleeping on his brother’s couch for an entire year in the city of Gothenburg. The result: the Alien Boy EP. Alien Boy is filled to the brim with pent-up anxiety and never-ending worry that signifies a coming of age in life as well as music. The undeniably relatable lyrics paired with an intoxicating fusion of rock, hip hop, and electronic timbres have signaled a new epoch for Whooda Thunk, and his new single “Used To” is his jaw-dropping greeting to you.

The video for “Used To” features Carl and Rickard spitting each line like it’s their last. A siren opens up the track, preparing listeners for the destruction that is about to ensue. Laying out nothing but the truth, Whooda Thunk isn’t afraid to speak his mind. “Used to be good then I woke up” sends chills down the spine of anyone taking a hard slap in the face by reality. The brutal honesty is certain to shake things up, and in a world dominated by a click-hungry mainstream media, “Used To” is just the kind of genuine sincerity we need.