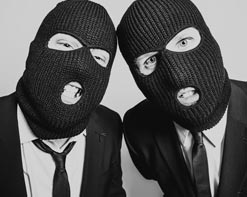 On their Facebook page their description says “Afraid of Martial Law? We ARE closer than you think!” Clearly Whyte Noyze are not just a couple of sheep following the flock. They want to challenge authority, and they want the world to be seen for what it really is: a pretty ugly place where the little guy gets walked all over by the puppet masters from above. Control is done through the media, money, and fear, and Whyte Noyze isn’t feeling it. Though the message and the content of the song may feel slightly hostile, ultimately their goal is to see a fairer, most just society where everyone has a chance to improve their lot in life.

The “His Story” video shows Whyte Noyze being pro-active in that regard. They are clad in ski masks and dapper suits, their true identities hidden from the world. In fact, watch any video or look at any press pictures of Whyte Noyze and they never reveal their identity. For them it’s not about WHO they are, it’s about the message they convey. Like a pair of modern-day Robin Hoods, they have set their sights on part of the 1%, a handsome, mimosa-drinking, Tesla-driving male who looks incredibly content and smug with his beautiful lady in their home that they’ve likely built off the backs of hard working folks beneath them. Is he a banker? A CEO? Just a generally rotten guy who gets what he has coming to him? Again, the faces and names are not important. What is important is the message it sends, and it is a powerful one indeed.

Here at HIP Video Promo, we always appreciate and acknowledge artists who push the boundaries of society, which is why we’re so pumped to bring you this new video from Whyte Noyze. We hope you’ll support this video in your programming, and please let us know if there’s anything we can do to help make that happen. Please contact Andy Gesner and the HIP Video Promo staff at (732)-613-1779 or email us at info@HIPVideoPromo.com .