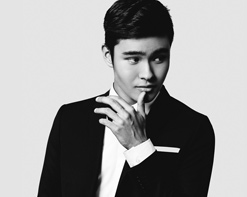 It’s all happened so fast that the music industry hasn’t really had a chance to weigh in yet. But the people have already spoken, and they’ve been unanimous about it: Will Jay is a star. Since his late 2014 departure from the pop group IM5 — the same outfit that gave the world American Idol finalist Dalton Rappatoni — the inexhaustible Will Jay has brought his music directly to his growing audience in every way he can. He’s been a fixture on YouNow, where he broadcasts to thousands of passionate fans twice a week. His YouTube clips — including one where he condensed the entirety of Adele’s 25 into a brilliant three-minute musical summary — have earned him attention for his cleverness as well as his formidable vocal skills. Last year, the handsome young Asian-American singer took his act across the Pacific to an enormous televised stage: The Voice Of China, where he tore through Bruno Mars’s “Just The Way You Are,” won an entirely new audience for his music and has amassed over half a BILLION video views and counting!

Given the widespread popularity he’s already attained, it was inevitable that Will Jay would make a first-rate, high-energy, irresistible music video that showcased his charm, his talent, and his strong pop songwriting too. Here it is: “Gentleman,” an anthem for every nice guy who refuses to finish last. Like the other songs on his Gentleman EP, this is an immediate winner — an intelligent pop number with endearing lyrics, an instantly memorable chorus, and a vocal performance by Will Jay that recalls Mars, John Mayer, Adam Levine, and the ’70s pop-soul singers he adores. To his credit, unlike other singers, he doesn’t try to be tougher than he is; he’s got class, and he’s not running from it. His come-ons are heartfelt, but they’re gallant, too.

Director Sunny Beatz puts Will Jay’s natural grace on display in the “Gentleman” clip. The star is captured during a night on the town (the lovely Los Gatos, California, to be specific — its landmark Art Deco movie theater gets a cameo in the video) with a young woman who shares his sense of style and decorum. And although Will Jay wears a suit and bow tie throughout, and his date sports a classic black dress, they’re not constrained at all — instead, they dance together straight through the video, showing off their vintage moves on the suburban streets and sidewalks and in the interior of a fifties-themed diner. If you can’t sit still either, well, don’t say we didn’t warn you.

We’re incredibly excited to be working with the Will Jay team to bring you another stellar video you won’t want to miss. To learn more or to let us know what we can do to get this video into your cherished programming, please contact Andy Gesner and the HIP Video Promo team at (732)-613-1779 or email us at info@HIPVideoPromo.com . You can also visit http://www.WillJayMusic.com/.