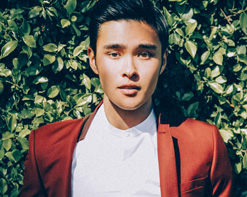 Will Jay told The Huffington Post that “I want to write the soundtrack for people’s lives, whether it’s a song that reminds them of a great time in their life or a song that simply gives them a good cry.” With a wealth of experience under his belt including his tenure in the boy band IM5, competing on Season 4 of The Voice of China, and the whirlwind of activity surrounding the release of his debut solo EP, Will is always able to the find the perfect words, the perfect music, and the perfect melody.

It’s a thrill to be partnering with Will Jay once again for the new “Leading Man” music video. We had the pleasure of working with Will for two videos last year: “Gentleman”, an intelligent yet endearing pop number, and “Christmas Come Early,” where Will stole our hearts with the doo-wop-styled number featuring rescue dogs that have either been adopted or are currently looking for their forever homes.

Directed by Sunny Beatz (who also directed “Gentleman”) and produced by Edgar Olazaba at Redwall Studio, the video is a statement about the “whitewashing” of Asians in Hollywood, where Asian characters are frequently portrayed by white actors. The “Leading Man” video opens to a casting director and his assistant discussing an “all-white kung fu movie”, saying, “People don’t want to see Asians in the films.”

Will (who is of Chinese and German descent) auditions to be the leading man, but the director tosses his resume aside immediately. When he leaves the theater, he sings and dances past movie posters for Ghost in the Spell, Doctor Estranged, and The Great Fall (all parodies of movies that were associated with whitewashing) which give him an idea. Will turns his hair blonde and his eyes blue, and when he returns to audition a second time, the director loves him. He gets into costume but once he’s in his dressing room backstage, he sees his true self in the mirror and realizes it’s not worth changing who he is.

Not satisfied with being typecast and relegated to the sidelines, Will Jay is ready to be seen as the “Leading Man” he knows he is. Please let us know if there’s anything we can do to get the “Leading Man” music video into your cherished programming. For more information please contact Andy Gesner and the HIP Video Promo team at (732)-613-1779 or email us at info@HIPVideoPromo.com. You can also visit www.WillJayMusic.com for more info on Will Jay.