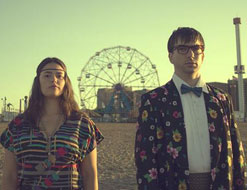 Hello programming brethren, it’s Andy Gesner and the crew at HIP Video Promo bringing you another two-for-one video reel that will satiate all of your musical needs. There’s no denying that this last year at HIP has been laden with boy-girl duos galore. From the thriving pairing of She & Him to newcomers like The Hundred In The Hands and Smile Smile, there really isn’t a shortage in sight of this successful formula. It’s one that just works, and this next duo is just the latest example of that. Their name is William Ingrid, and they’re bringing forth two videos at once to set themselves apart from the pack.

William Ingrid is comprised of vocalist Kristen Skinner and the multitalented Derek Larson. Skinner is at the forefront of the pair, singing over the beats and melodies created by Larson via synthesizers, samplers and guitars. Together, these New Yorkers create infectious electro-pop while emanating the essence of comparable songstresses like Feist.

There’s something undeniable entrancing about Skinner though, and it’s not just her voice. She oozes a kind of delicate energy that has you admiring her from a distance. You can see this in William Ingrid’s two videos for “Light My Flame” and “Move On.” The former encompasses the feeling of love at the peak of almost feeling euphoric. While Skinner sings, “I could be your Bonnie, and you could be my Clyde” while riding in the back of a motorcycle with Larson, the actual beauty is within their setting. Filmed in Montana, “Light My Flame” displays the kind of connection that can only be rivaled by the nature that surrounds Skinner and Larson. It’s a simple love song and an equally simple video, but somehow, you just won’t be able to tear your eyes away.

Even though the pace of “Move On” feels a little more energetic and dance-y, it’s a whole new visual that literally puts William Ingrid in a different light. The clip is filled with cool lighting techniques, different hues of color and fancy mirror tricks that plays with the faint silhouettes. While Skinner is belting it out in an empty brick-exposed room, Larson is up on the rooftop, playing his guitar. Even when physically separate, the connection between the two is clearly present.

Both “Light My Flame” and “Move On” are off of William Ingrid’s debut album, Where Are You?. The videos for the tracks alone will certainly get a buzz going, but just take a look at what Aaron Basiliere from Pop Matters had to say about the album: “The song structure found on William Ingrid’s debut showcases a wide array of different genre influences from bouncy 80’s-style synth-pop guitars to starry-eyed clubby ambience, spliced with whirring samples underpinning Skinner’s belted-out soul-slathered vocals. Where Are You? is an alluring and tasty elixir of electro-pop.”

We’re excited to be working with yet another act whom we’re confident we will be hearing a lot of in the coming months! We’re here to hook you up with all things William Ingrid, so please don’t hesitate to be in touch if you need anything from our end. If you need more info, call Andy Gesner at 732-613-1779 or e-mail us at info@HIPVideoPromo.com.