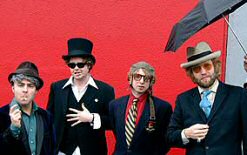 Howdy folks! It’s Andy Gesner and the staff at HIP Video Promo with more excellent video fun from Barsuk Records, the home to many of the upper echelon indie rock bands currently making major impact. Barsuk may be most known for critically acclaimed artists like Death Cab for Cutie and Nada Surf, but The Long Winters are the label’s best kept secret and they are very excited to share them with you. This video serves notice that this Seattle based musical anomaly is completely worthy of your attention

The Long Winter’s John Roderick has long been something of a legend in Seattle: hell-raiser, vagabond, prodigious student, and musician. He’s played in several popular local bands there, including The Western State Hurricanes and Harvey Danger. He was persuaded by musical friends Sean Nelson (Harvey Danger) and Chris Walla (Death Cab For Cutie) to go into the studio and record some of his own songs. When the resulting album, The Worst You Can Do Is Harm, begat a tour, The Long Winters were formed as a touring band. Their second full length, When I Pretend To Fall(Barsuk Records) includes the eccentric track “Blue Diamonds” .

The video for “Blue Diamonds” opens with singer/songwriter John Roderick being held hostage by a chain-smoking, Dove Bar munching French mobster and being grilled about a diamond heist. After that it gets strange. Roderick sings, blithely unconcerned with his plight, in an atmosphere that’s part cheesy film noir parody, part kid’s Halloween party, and even part performance; and ends with Roderick as a human piñata being whacked by whipped up schoolgirls in ballerina costumes. The whole mini-movie has a grainy, lo-res surveillance camera look.

The song itself has a mellow, easygoing groove with no suggestion of the tension depicted in the clip. Roderick’s guitar is terse and gritty, but unobtrusively so, and the soaring, triumphant horn part in the chorus is a most appropriate counterpoint. The lyrics are somewhat abstract, a series of mixed metaphors and non sequiturs that somehow add up to a quirky and mysterious whole. Michael Schilling (drums) and Eric Corson (bass) supply the foundation that supports Roderick’s lyrical and melodic flights of fancy.

HIP Video Promo and Barsuk Records are proud to present the “The New Year Celebration” contest! Any programmer that adds the brand new video from The Long Winters enters a drawing to win the complete Barsuk Records catalog (Death Cab for Cutie, Nada Surf, Rilo Kiley etc.) and a T-shirt prize package. Barsuk Records has an impressive roster of bands that can be viewed at their website (link below) For more info contact Andy Gesner at HIP Video Promo at 732-613-1779 or e-mail info@HIPVideoPromo.com. The drawing will take place New Years Eve, December 31st.