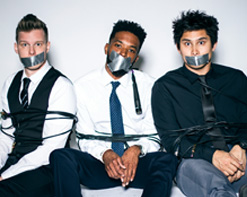 The music industry of the 21st century has been nothing short of a rollercoaster ride to say the absolute least. Record sales are nearly obsolete, streaming services pay about as much as serfdom, and the pools of artists in all popular genres are more oversaturated than ever before. Los Angeles, a city that needs no introduction, is swimming with talented artists who continuously get swatted down by the all or nothing bets of the industry. Three of LA’s tortured artists, Marc Avery, Sean Carney, and Rockwell Sands have joined forces to take things into their own hands with their new band, WOLVES.

Each member of WOLVES spent the last few years of their lives writing songs for other people. Needing to make basic amounts of money to eat, being a songwriter in a city full of performers seems like a solid way for many musicians to do just that. But these three artists quickly discovered that the more cooks in the kitchen, the more complicated things get, and with groups of performers, managers, and labels brawling one another with opinions, frustration and resentment boiled within the young songwriters. Thanks to a stroke of luck, Avery, Carney, and Sands fell into each others’ laps right as the pots were spilling over.

WOLVES have come howling out the gate in their debut single, “Animal”. This hook-laden pop rock smash features a blood-pumping 4-to-the-floor beat by Sands, while colorful synths and tasteful guitars creep into the mix, patiently waiting for their cue to drop into the chorus. Singer, Marc Avery ferociously belts, “love me like an animal!” and its game on. A club-inspired synth line drills away, backed up by an anthemic chant, securing its spot as an instant fan favorite at shows. The artistically driven and perfectly polished music video was written, directed and edited by the mastermind, Alec Di Marco and HustleCake Productions. Fun, sexy, and aesthetically inspiring, the “Animals” music video serves as the ultimate introduction to the WOLVES brand, tipping off listeners that, yes, they have the whole package.

Here at HIP we’re absolutely ecstatic to be teaming up with a band with such promise and hunger like WOLVES to bring you their debut “Animal” music video, and to secure your support for this outstanding clip would totally make our day! This musical trio are impossible not to root for and rest assured we’ll have plenty of WOLVES merch for on-air contests and online giveaways! They’ll also be available for interviews, Q & As and meet and greets so don’t be bashful about getting in touch. Please contact Andy Gesner and the HIP Video Promo team at (732)-613-1779, email us at info@HIPVideoPromo.com. You can also visit www.TheBandWolves.com for more info on WOLVES.