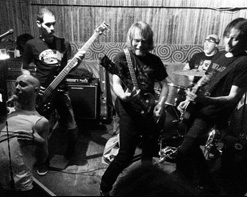 Who in their right mind enjoys Mondays? Usually no one, which is why World War IX’s new video for “Thank God It’s Monday” is such a hilarious, ironic riot. Just like their previous video, “Have You Seen My Drugs?” from earlier this year, “TGIM” is a tongue-in-cheek, energy fuelled punk rock romp. This vintage American punk band from Brooklyn is exactly what we need in these times of disillusionment. The band’s noted cynicism takes an unexpected positive note in this anthemic three minute musical short.

This sketch-style comedic video shares the same name as the comic book that chronicles the band’s misadventures created by guitarist Justin Melkmann. It is a testament to all of us hard working, Monday hating, average Joes and Janes that at times have only music to save our souls! The video opens with a humorous short journey of a liquor bottle travelling from one employee, to another, each one pretending to be confiscating the bottle but then keeping it for themselves. Then and only the does the band kick in into high gear! They parade around the office with their instruments, spreading that good ol’ rock and roll. Around the middle of the video, Justin’s comic makes a cameo appearance. All around it’s an amusing, dose of cynicism and sobering realities mashed up with the hard hitting beat of punk rock.

Love for the trashy punk rock band is unparalleled! “The soundtrack to my NYC breakdown,” says Michael Del Re’. “World War IX seem to be on a whole other mission to irritate some people, satisfy the old schoolers looking for something true to the core, and most of all, do it in such a quick period of time that if you love them you want more and if you hate them, they are happy they made you hate them in less than 10 minutes,” wrote In Crowd Zine. Whether you hate WWIX or love them, there’s no denying this band gets your fist pounding and your heart pumping.

It’s a terrific pleasure to be working with the World War IX crew once again to bring you this exceptional burst of punk rock excellence! Please let us know what we can do to help you get “Thank God It’s Monday” into your programming! Contact Andy Gesner and the HIP Video Promo team at (732)-613-1779, email us at info@HIPVideoPromo.com. You can also visit www.Facebook.com/World-War-IX-WWIX-122625501170653, jmelkmann.tumblr.com or Twitter.com/WorldWarIX for more info on World War IX.