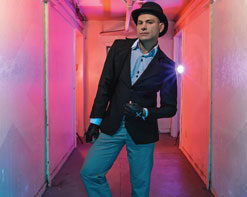 Xavier Toscano believes that pop music is the soundtrack to our lives. It etches powerful memories in our minds. When you hear a song from your past, it immediately takes you back. Faded, sepia-toned memories rush in with a colorful pop. When you hear a great pop song on that road trip or at that school dance or that time just hanging with friends, you know it’s going to be a memory that lasts forever. That is why Xavier loves pop music so much. That is the power he has infused into his newest single and video “Apologies Wasted.”

Xavier’s music is influenced by Top 40 radio and video. It can best be described as enthusiastic, energetic, dance-urban pop. He also blends his love of disco, rap, rock, reggae, and R&B with his dancing ability to create a dynamic stage show. Xavier has performed across the United States and Europe, and continues to entertain locally. Wherever Xavier performs, he is always praised for having a “ton of energy.” Combine that with his strong stage presence, and you have well rounded entertainer who puts on electric and engaging show.

Let’s talk about “Apologies Wasted.” It’s a slick video that is simple in concept but uses a mixture of clever cinematic techniques to create grandiose dance pop clip that is high in energy and brimming with emotion. The choreography of Xavier and his squad are the central theme of this video, where there isn’t a dormant muscle from beginning to end. Toscano and director Benjamin Jones cast a mysterious light on the trio inside a dark room, assuring that the focus is entirely on the movement of their bodies. Additionally there are many shots of all three underwater under a single spotlight. The slow motion shots of them continuing to dance underwater is a striking look, and one that tastefully adds another tier of artistic vision to this gorgeous video.

Here at HIP Video Promo, it’s always our pleasure to help new and deserving artists such as Xavier Toscano get the exposure they rightfully deserve for all of their hard work. Please contact Andy Gesner and the HIP Video Promo team at (732)-613-1779 or email us at info@HIPVideoPromo.com . You can also visit http://www.XavierToscano.com/ for more info.