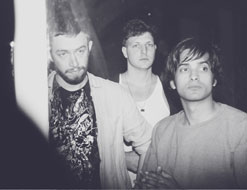 Hello friends! It’s Andy Gesner and the staff from HIP Video Promo, and we are elated to share with you our 800th video! Time flies when you’re having fun, and we couldn’t be happier that the distinction goes to this newly-shot clip that’s already setting the Internet aflame. Like many devoted music fans, we’re already checking the 2010 release schedule for big names, and there’s nothing on the early calendar more hotly-anticipated than ODD BLOOD by Yeasayer. All Hour Cymbals, the band’s startling debut, dazzled listeners — and the band’s reputation has only grown since its 2007 release. Released in a low key fashion, the music on Yeasayer’s debut built a reputation for itself landing them a tour with Beck, a spot on Late Night with Conan O’Brien, and slots on some of the biggest festivals including Lollapalooza, Reading, Glastonbury, Austin City Limits, Bonnaroo, and Pitchfork. They even played a special show in the rotunda at the Guggenheim Museum in New York City. They’re one of the few bands that arty sophisticates and raw punk kids (and everybody in between) can agree on, and we anticipate long lines at record stores on the day ODD BLOOD is released.

Further evidence of excitement: the ecstatic response to the ‘Net release of Radical Friend’s trippy clip for “Ambling Alp”. We hate to use the phrase “going viral”, because it’s become such a cliche, but in this case, there’s no way around it — the link to the latest Yeasayer video has been passed around the internet at dizzying speed. Standing alone “Ambling Alp” is a spectacular pop song filled with hooks and sing alongs. When “Ambling Alp” is added to the visuals created by Radical Friend it creates a force much like the ground breaking videos in the Eighties making this wildly-imaginative piece feel like an instant classic. Better yet, its fusion of the technological with the primal is a perfect match for Yeasayer’s ambitious sound.

Yeasayers experimental sensibility is not only rooted in their recordings, but also their live show. Whether it’s video projections or their latest stage design of glowing alien light pods, Yeasayer create an environment all their own that makes for a unique and memorable experience. These ideas spawned the ideas of what became their dazzling new music video for “Ambling Alp,” the debut single off ODD BLOOD. The visuals in the video are bizarre, arresting, almost dream like: hooded boxers with mirrored faces slug it out, a hooded rider on horseback patrols a lunar landscape, and the band is birthed out of an alien-type goop whose faces eventually detach and stretch across the screen. Cinematically the “Ambling Alp” video is nothing short of spectacular, and NO that is not stock footage of the horse! Some have suggested nods toZardoz, The Holy Mountain, and the films of experimental artist Maya Deren. Possibly coincidence, but great company indeed!

It’s with much excitement that we bring you the 800th video from HIP Video Promo and we couldn’t be more excited to once again be working with one of our favorite labels, Secretly Canadian, to bring you this video. If you need more info, call Andy Gesner at 732-613-1779 or e-mail us at info@HIPVideoPromo.com . You can also visit www.SecretlyCanadian.com or www.Yeasayer.net to find out more about Yeasayer.