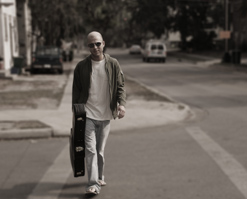 Greetings music aficionados! It’s Andy Gesner and the staff from HIP Video Promo, here with a clip from a young artist unafraid to attempt to channel the voice of his generation. Surely you’ve been there: fresh out of college with a degree, but no clear direction. Life, which was once structured by classes and parental supervision, now seems open-ended; the freedom is exhilarating, but terrifying, too. It’s a time of recreation and wild experimentation, but also one of aimless drift and danger. Yoni has lived it – as have most of us – and he’s made it the subject of his maddeningly-catchy pop-rock songs. The Florida singer’s songs have the ring of truth to them: they’re tales told by a battle-scarred reporter who has been there in the trenches. And as he’s toured, recorded, and distributed his independent music through the Internet, he’s connected with thousands of young listeners who identify with his endearing characters.

Extra Credit is just the most recent compilation of Yoni’s songs, but if you’re a frequent reality-television watcher, you’ve probably encountered them in a different context altogether. “Twentysomething”, his best-loved track, has been licensed for use on The Real World and Road Rules, Road Trip Nation on public television, and Oxygen Network’s Bad Girls Club. In fact, Extra Credit can be heard on a myriad of MTV shows too, including: The Hills, My Super Sweet 16, Newport Harbor: The Real Orange County, and Human Giant. It’s not hard to see why these programmers are attracted to “Twentysomething”: the song simply feels like an authentic chronicle of questing youth. The narrator is ambitious but unsure, eager but wary, blinded by the clublights and reaching for the stars. Yoni sings it all in an instantly-winning voice – maybe a little booze-soaked, but certainly approachable. His is the voice of a friend at the bar, a compadre, someone going through the same struggles you are, and who bleeds sympathy. Fans of John Mayer, Sublime, and the Dave Matthews Band will take to the track immediately; others need only to listen to the perceptive lyric to be brought back (or forward) to that time of lust, indecision, and high hopes.

Yoni is no glamorous video star – but that only adds to his appeal. The young writer and guitarist looks the part of a working musician: handsome, a little rugged, a bit combative, shaved bald and ready to rock. Todd Segal’s clip for “Twentysomething” captures Yoni exactly where you’d think he’d be: onstage at a club, at home on his sofa, strumming an acoustic guitar out on the street, chilling out and playing cards with his friends. Just like the song, the video has a true-to-life quality to it: this may not actually be Yoni’s house and favorite bar we’re looking at, but then again, it certainly could be. Surely his room has all the accoutrements you’d expect – a home recording setup, a desk lamp, and a Florida Gators clock keeping time on the wall.

It is a pleasure to be working directly with Yoni Leviatan and his label Songs of Yoni to promote the clip for “Twentysomething.” We have also been supplied with plenty of copies of Extra Credit for all your on-air giveaway needs, as well as t-shirts, hats, and more! So don’t hesitate to get in touch to score some premium Yoni giveaway goodies. If you need more info, call Andy Gesner at 732-613-1779 or e-mail us at info@HIPVideoPromo.com . You can also visit www.SongsOfYoni.com to find out more about Yoni.