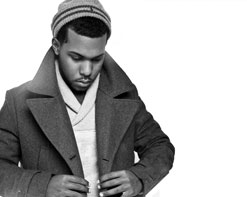 The story of Zac Fresh can best be described as one of resilience, hard work and inspiration. Born Zachary Muhumad in Columbus, OH, he lost his beloved mother at the young age of 7 years old and had to learn how to fend for himself at a very young age. This didn’t stop him from following through on his passion for music, if anything it thrust him headfirst into it, as he found comfort during the years after his loss in these songs. When he was only 13 years old, he had the distinct opportunity to record with one of his idols, and rap powerhouse, Soulja Boy. Their collaboration, “Ride Real Low” was a substantial hit and touring the country with Soulja Boy soon followed.

But the music industry can be a cruel game, and just one year later a major label offer was ripped out from under him at the last moment, even after having spent some time recording with producers like Chris Flame (Gorillaz) and Diesel (Lil Wayne). Needless to say, 14 year old Zac was devastated and made the decision to quit the music industry, not trusting the industry around him. Thankfully for all of us, his manager talked him out of it and encouraged him to just take a break and regroup. It turned out to be one of the best decisions he could have made. Not long after Zac scored himself an appearance on BET’s 106 & Park, who were so impressed with his persona and skills that they enlisted him to pen the theme song for their Wild Out Wednesday segment. This lead to a production deal with Atlanta producer Linx Kanek, who has been an instrumental part in the continuing development Zac’s career.

Enter 2012 and fresh off Zac’s Mile High School full length we have the new “Blame Yo Self” video, which not only features one of the hottest names in the game today, Cyhi The Prynce, but also showcases Zac Fresh at his best, calling out all the haters and nonbelievers from his past. With true ease and style, Zac and Cyhi tear through their traded verses like a hot knife butter that nobody in their right mind would accuse of being anything other than the real deal. One listen to Cyhi’s verse rhymes, and it’s no wonder he’s landed himself on the roster for Kanye West’s G.O.O.D Music, and it’s even less of a surprise that Zac and Cyhi find themselves in each other’s company. After all, like minded and talented folks will naturally gravitate towards each other. The video for “Blame Yo Self” keeps it simple, showing Zac strolling the city streets, earbuds entrenched in his ears, before moving into a photoshoot setting along with Cyhi. It’s professionally shot with lots of nice camera tricks up their sleeve to keep all eyes on them, but the real star of the video is Zac himself, whose star power is apparent and on full display. Zac Fresh is the real deal and he’s brought his A game and A list friends to prove it, so let this be a lesson to all the haters and nonbelievers; don’t ever doubt Zac again!

We’re very excited to be working together with Kanek Musik and TGIF Music Group to enlighten everyone to goodness that is Zac Fresh. We’re hooked up with copies of Zac’s full length, Mile High School, and we’d love to hook you up with some copies. Don’t hesitate to be in touch to get your fix of Zac Fresh! If you need more info you can contact Andy Gesner and the HIP Video Promo staff at (732)-613-1779 or email us at info@HIPVideoPromo.com . You can also visit www.Twitter.com/ZacFresh for more info about Zac Fresh.