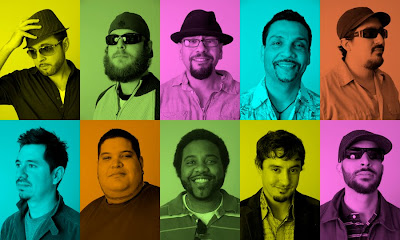 From AVClub.com
With its shimmering horn section and grooves so tightly wound that James Brown wouldn’t dock it a red cent, Grupo Fantasma has been unsurprisingly a favored backing band for Brown acolyte Prince. A guest spot from Maceo Parker on 2008’s Sonidos Gold only heightened the funked-up combo’s connection to Brown, but on this year’s El Existential, Grupo Fantasma looks not to Mr. Dynamite for inspiration, but rather “the hardest working arachnid in the insect business.” From its cover to its lyrics, the record is infested with spiders, weaving a gossamer web of groove that catches styles from cumbia to new wave. check out the whole article here