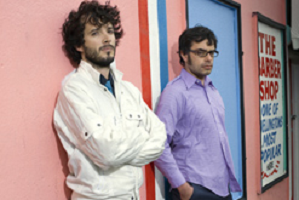 Flight Of The Conchords may have started as a joke – Bret McKenzie and Jemaine Clement started the duo as a sketch about “New Zealand’s fourth most popular guitar-based digi-bongo acapelle-rap-funk-comedy folk duo” – but no one’s laughing now: their irreverent videos and off-the-wall performances not only won them awards across the world, it landed them spots on the Letterman Show, Conan O’Brien, and NPR, as well as festival slots at Bonnaroo and Sasquatch.

Their first proper release was Flight Of The Conchords in 2008, and it debuted at #3 on the Billboard charts. That summer we had a blast promoting the video for the lead single “Ladies Of The World.” It’s the Conchords’ take on promiscuous seduction music that could almost be a Beck song a disco track, except it’s totally distinctly Flight Of The Conchords. Director Nima Nourizadeh has shot Clement and McKenzie in period threads for a seedy-Seventies aesthetic , roller-skating and dancing in the sunshine between the palm trees. All the ladies they’re trying to seduce? Yeah, they’re on skates, too.

Another album, I Told You I Was Freaky, followed in 2009. There was a reunion tour in 2012 in New Zealand, and they also recorded a charity single for Red Nose Day that year, “Feel Inside (And Stuff Like That)”. There have been talks of a Flight of the Conchords movie over the years but nothing confirmed. They went on tour in North America in 2016, where they performed new songs and old hits, as well as featured in an HBO concert special in London in October 2018. “Father & Son”, from Flight Of The Conchords: Live In London was even nominated for the 71st Primetime Emmy Awards for Outstanding Original Music & Lyrics in 2019. Check out flightoftheconchords.co.nz for more info!