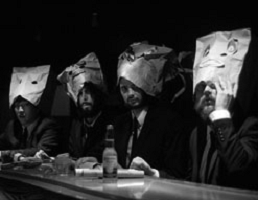 Orange County, California has been a musical hotspot for decades, and in fact, Rx Bandits lead vocalist/guitarist/percussion/keyboardist Matt Embree graduated from Los Alamitos High School, where members of Reel Big Fish, Save Ferris, and The Scholars had also attended. The band originally formed in 1995 as The Pharmaceutical Bandits, and changed their name to Rx Bandits in 1999 with the re-release of their album Halfway Between Here And There on Drive-Thru Records.

While their early material fit the third-wave ska sound, they branched out by the early 2000s to a sound that can’t be boxed in by labels. They’ve played at a variety of festivals: Vans Warped Tour, Bamboozle, Bonnaroo, and even Coachella. After four releases with Drive-Thru they left their contract to work with MDB (Mash Down Babylon, Embree’s label) and Sargent House. Their third release with MDB/Sargent House came in 2009 with Mandala.

In May 2010, we promoted Rx Bandits’ music video for “Hope Is A Butterfly, No Net Its Captor”. The band members play a gang of well-dressed thieves with paper bags on their heads, holding up average citizens. They’re on a rampage, holding up average citizens for their money…. and worse. “Hope Is A Butterfly…” combines elements of ska, reggae, and progressive rock, for a sound that no one else could imitate.

In 2011 Rx Bandits went on what was planned to be their last tour, but the band has actually hit the road several times since! The toured Brazil in the summer of 2012 and toured the US in the summer of 2013 to celebrate the tenth anniversary of their album The Resignation. Their album Gemini, Her Majesty was released in July 2014, and they celebrated it with two shows at The Glasshouse in Pomona that December. They toured again in 2015, joining Circa Survive who were celebrating the 10th anniversary of their album Juturna; Rx Bandits played as a four piece on that tour with no horn players present. Rx Bandits’ most recent tour was a 10th anniversary tour of And The Battle Begun in 2016; the band has been mostly inactive since then although they performed at the House of Blues in Anaheim, CA on January 24 of this year with support from Anthony Green. However, Matt Embree has filled in on tours for other bands, recently touring with Dispatch.