Maximo Park is touring it up 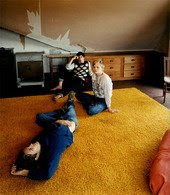 Grizzly Bear is touring from May through June, through North America. Check out dates and locations here.

Last Wednesday marked the one-year anniversary of Grizzly Bear’s ep titled Friends, in which they recorded song specifically for their comrades in indie music, Band of Horses, CSS, and Atlas Sound.

And don’t forget about their upcoming album, set to be released in the coming weeks, Veckatimest.