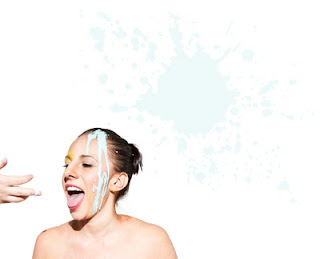 Rock and roll and pop music has a legacy that is built on big attitudes and a fearless approach to life. Some of the most defiant and powerful of these personalities aren’t men either, they are actually members of the fairer sex. With names like Debbie Harry, Madonna, Pink, and most recently Katy Perry, women have a long history of rocking the boat and constantly reminding us that music is a coed activity. And while the girls with attitudes have recently become decidedly pop stars, we’re excited to bring you OLAROKS, from Toronto, who bring back the dirty indie rock edge with their new single “I Like Your Bitches (Dinner)”.

Fronted by principle songwriter and namesake Ola Roks, the group is a no-holds barred approach to indie rock music that has been causing audiences in Canada to give second and third looks for a few years. Now it’s time to make their way into the US. And although in person Ola Roks has every bit of that genuine friendliness that is associated with our neighbors to the north, her music and art is filled with biting lyrics and raucous music that can quickly shake up your eardrums. This is a girl whose Twitter handle is @notmyvirginears, after all.

The new album, Somebody’s Girl, is an 11 song collection that shows a pleasant diversity and maturity to the sound of OLAROKS, simultaneously showing elements of indie rock and pop music but, and we keep saying it because it’s true, it’s always done in a unique way that is decidedly OLAROKS! Tracks like “Have Another” and “In This City” are just a sample of what this girl power is all about, but we think it is the final track and new single “I Like Your Bitches (Dinner)” that is the strongest example of what makes Ola rock. The video for “I Like Your Bitches (Dinner)” encapsulates the vibe of how sleazy life can be for aspiring young models by putting them front and center with one of the most suspicious characters out there, the photographer! Click here for the full bio on HIPVideoPromo.com.