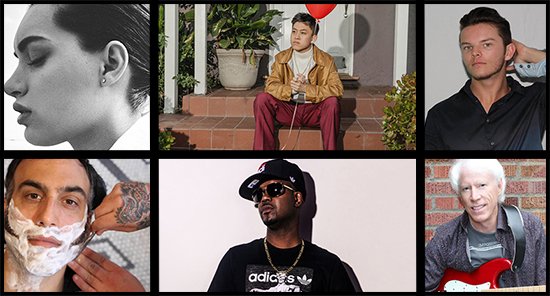 The calendar says there are a few weeks left of summer, but with Labor Day behind us it feels like the fall here in South River, New Jersey. A new season means a new crop of music videos to promote, and this week we’ve got some rather exciting clips to share with you. The newest weekly client roundup video gives the low-down on some of our current projects, and we’ll tell you a little bit about each one below.

We’re not sure what’s more impressive about Indonesian rapper Rich Chigga: that he’s only 17 years old, or that he taught himself to speak English by watching and listening to rap music. After gaining viral fame with “Dat $tick” last year, he’s back with the video for “Glow Like Dat.” “Glow Like Dat” shows a softer side to Rich Chigga, as he’s seen in a field of flowers reminiscing about his ex-girlfriend.

There’s no shortage of musical talent coming out of New Jersey, and we’re thrilled to be partnering with a longtime friend of HIP Video Promo, Michael Flannery, on the promotion of the “Embers of Dead Fires” clip for his new project, Mr. Flannery and His Feelings. Mr. Flannery and his feelings dive in to the subtleties of emotions and “Embers of Dead Fires” is a stark pop-rock track with roots in reggae. The clip is suspenseful, showing a chained Mr. Flannery in peril; watch for yourself to see how it ends.

There’s something wonderfully timeless, yet undeniably youthful, about the imagery of a seaside carnival. NYA is barely out of her teens but with “Let Go”- the follow-up to her debut music video “Round N Round”- she’s exploring a type of pop music that shows an awareness of classic American musical traditions, like Ella Fitzgerald and Frank Sinatra. The “Let Go” video sees her on the boardwalk, cotton candy in hand, with her eye on a potential suitor.

With his video for “Head Games”, Austin Higney- who makes music under the moniker Mello Talk– explores a situation so many of us can relate to. With a mellow alternative sound, the song and video explore feelings of unrequited love and what it’s like knowing you’re the right person for someone who’s stuck in a cycle of terrible relationships. “Head Games” was filmed in Higney’s native Fort Lauderdale, Florida, and sees him watching on as his love interest makes the same mistakes with a man who doesn’t treat her right.

If there’s one thing we’ve learned from partnering with a plethora of international artists, it’s that true talent shows no cultural boundaries. Regensburg, Germany’s The Edge Of Reason strike the perfect balance between melody and metal, and with their first single “Is She Worth It”, they tackle a theme many can relate to: girl problems. Yet it’s a different perspective, as they’re on the outside looking in on someone stuck in an unhealthy relationship. With a rapid-fire light show, the “Is She Worth It” music video encapsulates the raw energy and fury that we expect The Edge Of Reason bring to their live show.

For Midwest native Parrish Tha Great, an unexpected move to Dallas, Texas for a job transfer was life-changing in the best possible way. His encyclopedic knowledge of all forms of hip-hop and rap is evident in his new clip for “Get Rich”, which sees him and his lucky lady at an all-out party. The drinks keep flowing and the dance moves keep on coming as he celebrates feeling “rich.”

Jim Allchin is a mathematician and computer scientist, and after retiring from a long career at Microsoft, devoted himself to his other passion: music. He’s now three albums in as a blues player, and is consistently pouring life experience into his music. His latest clip for “You Might Be Wrong” extends the bright, wry mood of the song. As Allchin and friends are seen in the studio, a group of kids outside are hard at work building a clubhouse. But this clubhouse isn’t a secret club; rather, it’s all about inclusion and making everyone feel welcome, with a message to “Keep hate out.”

What new music videos have you had your eye on lately? Be sure to let us know on Facebook or Twitter what your favorite clip is this week!