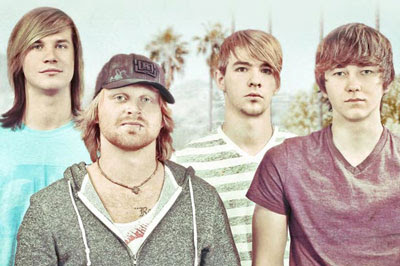 Hello cherished programmers, it’s Andy Gesner and the HIP Video Promo crew bringing you a new anthem that is full of big hits, big beats and a chorus that will stick to your ears like superglue! Summertime Dropouts, the Minneapolis-based pop-punk band is warming up the stereos with their new single for, “Full Time Cutie.” We found them hard to resist, as will you, when you find yourself reminiscing some well-known bands of the past, such as New Found Glory and Reliant K. Their debut album entitled, Rewind, contains a collection of delectable songs that transport listeners to a time when life was much simpler and easy going—when rock music was the only lessons we wanted to be learning. Loved by everyone from kids in high school and developing teens to 30-something mothers, Summertime Dropouts give meaning and something to believe in for the less interested and unmotivated teenager.
With inspirations from bands like The All American Rejects, Blink 182, Sum 41, and Boys Like Girls, Summertime Dropouts has crafted a style that is reminiscent of the past, but captures a uniqueness that no other musical group has entertained. Executive producer, Clint Gibbs, who has been involved with many commercially driven successful musicians such as Katy Perry, Nicki Minaj, Rihanna, Britney Spears, and Pitbull just to name a few, has said, “Their skill and dedication to the music is on par with major label acts. After hearing some of Summertime Dropouts demos, I knew they had a great record ahead of them.” As a newly formed band, these band members are anything but amateur—each member of the band has had a successful run of touring experience. For instance, lead vocalist, Dave Erickson, has recently fronted the much loved Saint Paul rockers Fades Away. Saint Paul, Minnesota seriously misses these heavy rockers (affectionately known as “dude rock”), but it was all just a warmup to Summertime Dropouts.
The video for “Full Time Cutie” captures the essence of the extent of a teenager’s every day life. It follows the typical “5 day melodrama” of life in high school. Filled with name-calling and sometimes extreme bullying, most teens feel that they have no one to turn to. However, it is with the musically positive influence of Summertime Dropouts that socially awkward and emotional teens can find something to believe in, particularly the lead actress (a real full time cutie) who is more comfortable in her own skin than any of the prom queens and “popular” students. Drenched with football games and note passing, it is apparent that not much has changed in the daily life of a high school student. There are the bullies and the bullied, but we’d really like to see the future the frontman Erickson looks to; “10 years and swear that they are happy”. Above all, there is the thought that some teens are just not good enough, but Summertime Dropouts hold a strong influence on contemporary teenagers and it is clear that they will pique the interest of all rock and roll fans with their pop-punk driven songs.