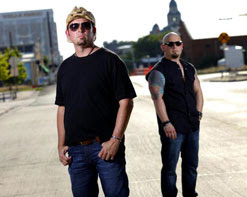 For friends and artists August & J, collaboration comes easy. With a unique blend of compatible influences such as Gavin DeGraw, Ryan Adams, Train, and Bon Jovi, the two formed the contemporary music duo known as August & J. Together, they have crafted a series of EPs and one full-length record, but have years of experience working together on the creation of stylistic songs. With a sound that can be compared to Rob Thomas of Matchbox Twenty or Ed Kowalcyzk of Live, August & J have come together to present us with their cleverly shot and scripted new video “For Once.”

After fifteen years of musical separation, J had been feeling as if something was missing within his musical career. In the meantime, he contacted friend August, whom he had worked together with on songwriting collaborations in the early 90s. Life handed them both separate situations and it had been wise for the two to be apart. However, J’s instinct to become reacquainted with August has landed them an important spot in the contemporary music scene. In May of 2009, August & J released their first EP, and over the course of the eighteen months afterward, had released an additional two more. Earlier this year, they released their first ever full-length debut album titled 40, which has been gaining a widespread amount of positive critiques. The album contains songs that are fresh, as the roots of rock and roll intertwine with profound lyricism. From their new album, HIP Video presents their video “For Once,” which proves to show the unique and balanced sounds that their music has to offer.

The song “For Once” reflects on ideas that pertain to love and loss, and it is exemplified through the main character of the woman from the video. In the beginning, we experience the aftermath of a moment in which this woman had been extremely angry. In quick, yet unique ways, the camera presents us with images that move in backward motions, causing us to witness the entire episode of her freak out in backward, slow motion. Every detail is made noticeable: from the red wine stains on her shirt to the broken pieces of glass from a mirror she was shattering, “For Once” contains an impeccable amount of profound lyricism that is both universal and extremely compassionate. August & J are also seen performing in a room during the aftermath of this woman’s disastrous emotions; the video as a whole hints at certain aspects of life that should not go unnoticed.
Check out August & J’s artist page at HIPVideoPromo.com!