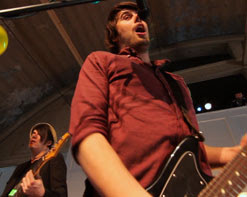 The video for “Believe” holds a certain type of energy that is highly positive and upbeat. It’s really no wonder why internet personality and HIP pal Bryan Stars was quick to feature the video on his YouTube channel. We watch as band members stroll through different situations and settings, handing out flyers and mingling with their peers. The band finally make it to the stage by the end of the video, and it turns out that viewers have waited in utter anticipation for this moment to occur! The song features Ryan Dunson of Rookie of the Year, a band that has worked side by side with City Under Siege. The song captures the true radiance of this band, and gives us a sneak peek as to what City Under Siege will do next! Click here for the full bio!