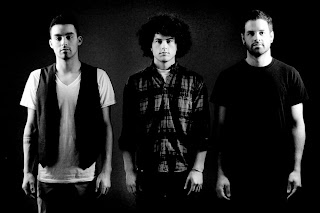 Formed in New Jersey by cousins Jonathan Capeci and Joey Beretta, the trio–including Anthony Genca–is forging a path that reflects the band’s music itself: putting the right pieces in the right places at all the right times. Since their formation in 2009, Dinner and a Suit quickly captured attention with their signature pop/rock sound – leading to critical acclaim, a swelling dedication of global fans, and coveted live dates that have included MTV2’s Projekt Revolution, the Vans Warped Tour, and tours throughout the East Coast and Midwest. The spiraling success fueled Dinner and a Suit to transplant to Nashville in late 2010, where they began work on what would become Since Our Departure – their brand new full-length album. “We left the comforts of home to pursue this dream,” explains Capeci. “And that definitely comes through on this record.”

To record Since Our Departure, the band split their time between Glow in the Dark Studios in Atlanta with producer Matt Goldman (Anberlin, Underoath), then with Tyler Orr (As Cities Burn, Copeland) at First Street Studios in Cleveland TN. The resulting work is a range of bold anthems, layered with soaring melodies that are riveting with honesty. Throughout the album’s ten towering tracks, Capeci’s lush timbre weaves universal themes of forgiveness and hope, love and loss, and discovering a place in the world. “It just poured out of us,” Genca adds. “There’s a lot of passion and energy on this record. It’s an experience that we’re sharing with the listeners in a very real way.”