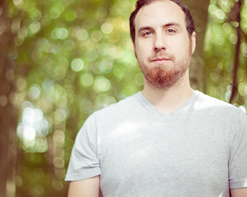 What is a gaunt story? Pick the words apart and you have a thin tale, a bedraggled novella perhaps. Turn your ears towards deepest darkest East Lancashire, however, and you will find Gaunt Story is the musical moniker of one Rob Ashworth. Ashworth creates songs that are stories indeed, but far from thin or bedraggled. With a lyrical cryptic intimacy that is comparable to Joanna Newsom or Justin Vernon, Rob Ashworth’s songs have both the delicacy and strength of a finely-spun spider’s web. Gaunt Story’s strength is Ashworth’s multi-instrumental talent, and within the space of three minutes (or fewer) you can often find yourself tapping along to a traditional 4/4 beat before being tugged into a loop of chimes and seesaw rhythms, pulling you through a soundscape as pretty as any northern sky. There is no room for filler or ego-centric fretwanking here, as Ashworth packs his vignettes fit to burst with intrigue and leaves you wanting more. Sometimes jaunty melodies and haunting, baffling, words that rebound off each other in a dance or battle – at other times a simple phrase that twists and turns itself inside out.
Comparisons with other northern troubadours such as Badly Drawn Boy are inevitable, perhaps, but will be somewhat off the mark – Gaunt Story is in a class of his own, and has made himself quite comfortable there. With each Gaunt Story song there is a spark, a cheeky wink, that lets you in on Ashworth’s secret. And what is that secret? That Gaunt Story has deciphered something singular within the human condition and isolated it within the simplicity of a song. (Huge thanks to Ian Adamson for providing the excellent write up of Gaunt Story you’ve read above!)
For his new video “Companion Waves” has kept with his unique ability to be the sole driver and focus of the video. It is a skillfully shot clip that takes everyday trivialities and adds a cinematic element to them so that everything from lounging out on the couch and watching tv to preparing a small meal and going out for a daily jog is a visual treat. Rainbow prisms and kaleidoscopes of color fill the screen. But if you watch closely everything is not quite as it seems, and there is something decidedly darker and more complicated happening in this story. While it may appear on the surface to be a simple concept of a video, if you pay attention to the details you’ll notice the deeper story happening. So keep your eyes peeled on this one!